View basket “Fool’s Gold – A History of British Saffron by Sam Bilton” has been added to your basket.
Sale!

Fool’s Gold – A History of British Saffron by Sam Bilton

Saffron has allured us with its golden hues throughout time. It was the darling of the Medieval kitchen, the saviour of the apothecary’s chest and gave cloth a regal glow. Unlike many spices, such as cinnamon, nutmeg and cloves, saffron can be successfully grown in England. From the middle ages through to the eighteenth century there was a thriving saffron industry in this country. Some people even claimed English saffron was the best to be found in the world. So renowned was the town of Chipping Walden for saffron production that it adopted the spice’s name at some point during the fifteenth century (it is now known as Saffron Walden).

Despite its expense, saffron was used extensively in British cookery particularly during the medieval era. It was also valued for its medicinal properties and was said to cure everything from melancholy to the plague. However, as tastes change our ardour for saffron waned and so with it the need and desire to farm it. By the end of the nineteenth century saffron production in England had all but disappeared, although there is a current day revival. Saffron is now a spice more commonly associated with ‘exotic’ dishes from distant climes. Given its lavish reputation (saffron is the most expensive spice in the world) it is no wonder that most people do not have it in their spice cupboard. Sam Bilton will show you how a few saffron fronds can make your repast a thing of great beauty and wonder to your dinner guests.

Sam Bilton is a food historian, who gives talks and cookery demonstrations  with a historical theme. She is also a food and drink writer, with articles appearing in magazines and online, with English Heritage, and she works on historical recipes, recreating them for the modern day, including an eighteenth-century recipe for a Bride Cake. Sam was the Awards Secretary of the Guild of Food Writers Committee, and on several panels.   She regularly broadcasts on BBC radio, and gives talks at RHS Horticultural Shows, in Hampton Court, London, and Tatton Park, near Liverpool. 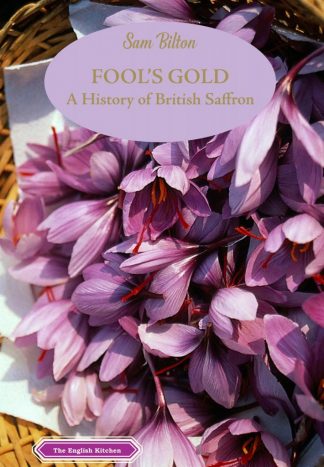 You're viewing: Fool’s Gold – A History of British Saffron by Sam Bilton £15.00
Add to basket