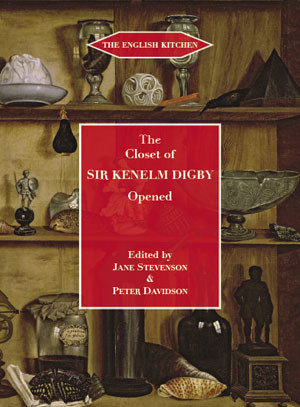 A PDF of the preliminary matter, sample pages from each section, and the index to The Closet of Sir Kenelm Digby, Opened. A review in The Tablet of Prospect’s hard cover edition of Digby

A profound discourser upon the “bodies and soules of men“, Sir Kenelm Digby (sic) would not have been pleased to know that this collection of recipes, published posthumously by his steward, is his most lasting monument. This is the unpredictable consequence of having a finger in every pie. Not only a handsome cavalier with six languages, but also a successful pirate, lover, scientist and bibliophile, his store-cupboard exhibited none of that manly austerity you might expect of his modern counterpart. On the contrary, it is a treasure trove of meath, metheglyn, sweet-meats, “flomerty-caudle“, “harts-horn gelly“, “marmulate of pipping“, conserve of roses, “sucket of mallow-stalks“, musk and ambergris. He was the first to hit upon the happy combination of eggs and bacon for breakfast, and for that alone deserves his place among England’s Great Men. Even if you have no desire to make pith puddings of plague water, the most perfunctory dip into these pages will have you reeling with the sheer poetry of the ingredients and instructions. There is such relish in the sheets of lard, the decoctions of herbs, and the sweetness of a mutton leg hung till it’s nearly ready to stink. Sir Kenelm sets about a fat capon with a lover’s rapacity. It is an orgy of guts, bladders, bellies, crackling bones, swelling and fermenting flesh, savoury juices and nourishing liquors. There is such finesse too in the measurements: when the honey-water ratio is just right in meath-making, a “henne’s egg will sail gallantly upon its surface to the breadth of a groat“. In the recipe for tea with eggs and sugar (brought by a Jesuit from China) the tea leaves are allowed to infuse for as long as it takes to “say the Miserere Psalm very leisurely“. Where precision is lacking, “Discretion and Experience” are expected to take their place. Homer’s famous list of ships almost pales in comparison with the table of contents: “sweet-meats of My Lady Windebanks“, “My Lord Hollis Hydromel“, “My Lady Diana Porter’s Scotch Collops” are just a few examples. The description of “how to fatten young chickens in a wonderful degree’ gives one an insight into the Brobdingnagian zest of an aristocracy that had no misgivings about its place at the top of the food chain. The pap of pulped raisins, bread and milk lit up by candles to ensure round-the-clock guzzling makes the chicks so fat that “they will not be able to stand, but lie down upon their bellies to eat“. This delicious book comes with a witty introduction, a glossary, several useful appendices, including biographical sketches of the aristocratic contributors, and some modernised versions of Sir Kenelm’s more access ible recipes. There can be no better way to get inside the skin of a seventeenth-century gentleman, to feel at first hand the “rawness and indigence of the stomach“, the pains of “Gravel“, stone, and “colick” and the virtue of fierce herbs coursing through the veins. Sir Kenelm was very much interested in the medicinal side of cooking. The sudden death of his wife Venetia was put down to the drinking of “Viper wine” and one can only suppose that this was one of his less successful recipes.