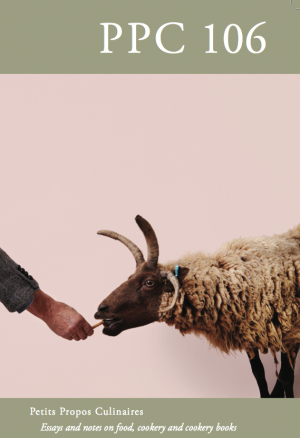 90 The Pig Swill Ban: a Sledgehammer to Crack a Nut  Gerry Danby
108 The Bland or the Bountiful? Notes on Australian Dining Between the Wars Paul van Reyk

Peter Brears is familiar to Prospect Books readers from his books on jellies, medieval cookery and Yorkshire food. His Cooking and Dining in Tudor and Early Stuart England appeared in 2015.
Gerry Danby has been director of legal and democratic services for the City of Bradford, and a director of Slow Food; he is now a lecturer in food law at De Montfort University, Leicester and a lawyer specializing in that subject.
Blake Perkins is a contributor to the Oxford Dictionary of National Biography and to the online quarterly magazine <www.britishfoodinamerica.com>. He holds an A.B. and M.A. in history from Brown and a J.D. from Chicago. He is now a lawyer in New York.
Andy Swinscoe has worked in cheeses for his whole career. He currently owns and operates The Courtyard Dairy in Settle, North Yorkshire, championing the few remaining independent farmhouse cheese-makers in Britian. The Courtyard Dairy won The Best New Cheese Retailer at the 2013 British Cheese Awards; and Best Cheese Counter and Cheesemonger of The Year at The World Cheese Awards 2013 and Farm Shop Awards 2016. It was also runner-up in BBC Radio 4 Food and Farming Awards 2014 Best Food Retailer and The Observer Food Monthly Awards 2015.
Malcolm Thick is the biographer of Sir Hugh Plat (Prospect) and an agri- cultural historian specializing in market gardening and vegetables. He has written extensively in this journal and elsewhere, notably in the Agrarian History of England and Wales.
Paul van Reyk is a regular contributor to the Australian Symposium on Gastronomy and has published articles in Gastronomica, Artlink, and Divine. Paul publishes a monthly ebulletin Compost. Paul has also published an ebook facsimile copy of the Cookbook of Ada de la Harpe.

THE PIG SWILL BAN: A SLEDGEHAMMER TO CRACK A NUT
Gerry Danby

In 2001 the UK was witness to one of the most devastating animal disease outbreaks in recent history. The foot and mouth disease (FMD) outbreak that year involved the slaughter of millions of animals and horrific images of burning pyres of dead livestock across the British countryside that will be etched on the memories of many for decades to come. The scale of the outbreak was due largely due to the fact that it was also one of the most poorly managed. The ban on swill-feeding pigs was one among many hasty, ill-considered actions.
While FMD represents an economic threat, it carries no imp- lications for the safety of the human food chain.1 Official figures put the cost of the outbreak at over £8 billion. The economic, environmental, social and human cost was, however, much higher and far exceeded that which was necessary.
We live with the legacy of the ban on swill-feeding today, at a time when the imperative is to eliminate food waste and reduce food miles to combat climate change. The rationale which underpinned the ban must be brought into question.
foot and mouth disease FMD is a highly contagious virus most commonly affecting cattle, sheep and pigs and manifests in symptoms of fever, lameness and vesicular lesions.2 It first appeared in Britain in 1839 and became increasingly prevalent through the mid-nineteenth century, so that it was considered an unavoidable and mild ailment which all cattle would, at some point, contract.3
In 1865 Britain lost 7 per cent of the national herd to the equally contagious rinderpest or ‘cattle plague’, which carried a high fatality rate.4 Legislation introduced to combat rinderpest5 brought FMD and other contagious diseases within its remit. Whole herds had to be slaughtered where only one beast was infected.6
In the aftermath of the rinderpest outbreak, debate raged over whether FMD should continue to be subject to the same stringent regulations. The Royal Veterinary College maintained that FMD was not a dangerous disease and wide-ranging control measures were not necessary.7 The view that FMD was a foreign plague which had to be stringently controlled had, however, become deep-rooted. Provision for FMD had already been made within legislation, circumstances had combined to cement the reputation of FMD as a serious plague-like disease:
It was in this sense that FMD was ‘manufactured’. FMD-as-plague wasn’t always ‘out there’ in nature, awaiting discovery by enlightened individuals. It was a new creation, a by-product of the processes involved in its control. And as this new vision of FMD grew in strength, its social origins were gradually obscured, until it came to be viewed as an incontrovertible fact of nature.8
The belief in FMD-as-plague took hold at the start of the twen- tieth century and formed the basis of future control measures. The absence of FMD was taken as confirmation that the controls worked but FMD inevitably returned, occasionally with a vengeance as it did in 1922–24, 1943, 1952, 1967 and 2001.