This delightfully illustrated book is an informative guide to Ladakhi cooking which has elements of Central Asian/Tibetan campfire cooking as well as the more sophisticated Moghul/Persian recipes which came in through Kashmir and Mghanistan. That Ladakh is part of India is fortuitous. It could easily have ended up in Pakistan or China. Ladakh was a great crossroads in central Asia and until the borders closed in 1947 its society was very cosmopolitan. Each caravanserai had its own cooking smells and cuisine. It was the melting-pot of Central Asian cooking, the hub for caravans which struggled across the Karakoram Pass to Kashgar and Yarkand or slipped and slithered down the icy and avalanche-prone Zoji La to the saffron-laden Vale of Kashmir. First get your yak, then kill it, a very Buddhist thing to do, which is why many of the Tibetan Muslims who were slaughtermen in Lhasa have chosen to settle in Kashmir. There is dried yak, frozen yak and even ibex on offer. The Bihari road workers like marmot, though it is considered too fatty and rancid for most, a bit like road-kill badger I suspect. Some of the yak meat when frozen is eaten raw, chopped into small pieces and eaten with kholakwhich is tsampamixed with tea or chang, the local beer. Tsampa is the staple food: roasted barley with dried peas which is ground in water mills and eaten like a thick porridge in a round bowl. Because the barley is roasted it is possible to eat tsampa on the march without cooking it. This fine book also includes a recipe for goat’s head jelly, yak’s blood sausages, mutton stew with yogurt, cardamoms, fennel and ginger, a mutton pilau from Yarkand, walnut chutney and endless uses of apricots. These Ladakhi apricots are the unsung heroes of the Himalaya. There are over 40 different varieties of apricot in Ladakh and many have come from central Asia and even Mghanistan. They make the most superb apricot jam. The altitude of Ladakh also affects cooking. Some of the nomad camps are over 16,000 feet so the water boils at a lower temperature. Pressure cookers are a distinct bonus when cooking on yak dung fires. There is also an aptly named recipe thud – a butter and driedcheese brick, as well as the ubiquitous red Tibetan tea which is enhanced with soda and rancid butter. On occasions in the Suru valley I have had variants of this tea with snuff and tripe floating in it. Then there are mok mok, Ladakhi tortellini. This fine book is very informative and gives many details of social and ethnic subtleties of Ladakhi life, perching as it does between Kashmir and Tibet, Mghanistan and China. India is to the south and Gilgit to the west. Rich influences indeed. What impresses me most is that this book has been published locally and all profits go to the Women’s Alliance of Ladakh which is co-founded by that erstwhile Dartington resident and globetrotting eco-warrior, Helena Norberg Hodge. There is a positively star-studded list of advisors for this book from Tashi Rabgias, Ladakh’s leading philosopher, to Janet Risvi a Cambridge historian who has written two very well-respected and cogent books on Ladakh. Gabriele herself is a retired but energetic and footloose administrator from Newnham College who now teaches English abroad. These grass-roots publications are an invaluable guide and addition to the world cookery scene. Get hold of a copy while stocks last. You may just meet a yak in Sainsbury’s carpark. JAMES CROWDEN

From cider and apples to barley, malt and ale, Roy Palmer gives us another deep insight into the drinking world. Where else can you find the poster for the Smartest Bar-Maid Competition, together with Jonathan Swift’s direction to the butler, ‘First shake the bottle to see if there is anything in it’? Wise man… Then there is the Tunnyng of Elynour Rummyng, Mother Bunch, Barley Mow and Chester Ale, small beer and Derby Ale, Pepys, The Brown Jug and Thomas Tipper, Wobble in Worcestershire, Cuckoo Ale, Birmingham Beer, and this marvellous quote from John Taylor the water poet, ‘Ale is an enemy to idlenesse, it will worke and bee working in the braine as well as in the barrel; if it be abused by any man it will tip up his heeles and give him either a faire or a fowl fall, if he bee the strongest, stowtest and skilfullest Wrastler either in Cornwall or Chistendome.’ Roy Palmer has managed to resuscitate a wonderful cross-section of ale and beer folklore and social history which would otherwise have been submerged in the froth of petty and watered-down commercial beers which we see today. Lager louts no thanks. Thank God for micro-breweries, real ale and CAMRA. This is the real history of England. Give me Mother Louse of Headington Hill, The Toper’s Rant, The Tinker’s song, Hopping along in Kent. Do not forget the humble hop. John Evelyn had this to say, ‘Hops transmuted our wholesome ale into beer, which doubtless much alters its constitution. This one ingredient, by some suspected not unworthily, preserves this drink indeed, but repays the pleasure by tormenting diseases and a shorter life.’ A Taste of Ale will certainly preserve you and torment diseases. No doubt reading it will also make your life longer. A pleasurable book and, like a good pint of ale, refreshing and heady, a fortifier and enhancer of life, wit and humorous company. JAMES CROWDEN

For several years I have dipped into this book for odd quirky quotes on apples and cider. A real assortment, entertaining and pertinent. Earlier this year I met Roy Palmer at Ledbury’s poetry festival, in the centre of cider country. It seemed high time that someone reviewed his small but delightful book. Often these compilations only reach the dedicated few but this deserves a wider audience. So much of our apple lore has bitten the dust. Pips to pips. And so it is heartening to see a ‘gribble’ take root. Here you have advice from Pliny on storing apples, saying that they should be gathered after the autumn equinox and not before the 16th day of the moon nor after than the 28th. There are poems about apples and moonlight, a treatise on ‘griggling’, quotes from Bartholemeus Anglicus, ‘Malus the Apyll tree is a tree yt bereth apples and is a grete tree in itself.’ Well said in 1470, and plucked from an encyclopaedia in Cologne. Then there are John Gerard, John Worlidge, William Morris, Louis Macneice, John Clare, Andrew Marvell, Edward Thomas Baring Gould, Cecil Sharp – a song or two, to name a few. And strange customs like ‘Crabbing the Parson’, Divination and Wassail. A book ripe for purchase and a bargain too. An incisive insight into the ancient and poetic world of apples and cider: a rich harvest. JAMES CROWDEN

We published this title in the summer and it gains a place among our reviews because Anthony Lyman Dixon sent me this intriguing speculation. I have printed the garden plan as it is in Lawson’s book.

WILLIAM LAWSON A COVERT HERMETIC? William Lawson was for many years the parish priest of Ormesby in Yorkshire. In between his parochial duties, he became an enthusiastic and highly experienced gardener and apple grower, so much so that he was prevailed upon by his friends to 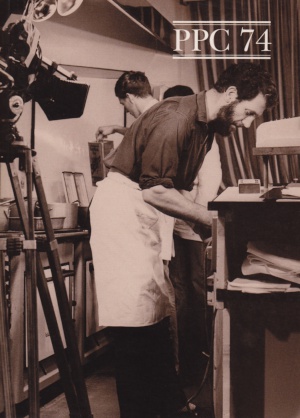