With great wit and undeniable delight, Tom Fort launches or rather lunches out on the eel, and in so doing makes a major contribution not only to our understanding of this much maligned and misunderstood creature, but also he serves up a real feast of fishy stories. I call the eel a creature because although it has gills and is technically a fish, it can survive out of water and make journeys across land when it has to. It is somehow locked in an ancient genetic time warp where it breeds in the Sargasso and confounds science with its navigation and discreet habits. As a story of migration it is equal to that of the salmon but diametrically opposed. It breeds in the ocean and comes to the freshwater rivers to feed and grow. The salmon of course goes down to sea as a smolt and comes back as an adult to breed. Smoked eel is just as good as smoked salmon. Tom Fort manages to convey in a relaxed style the idiosyncrasies of the eel in classical literature; the Roman and Japanese obsession with eels; eel pies and jellied eels in Victorian London. There are interviews with two friends, Brendan Sellick – Somerset’s favourite and only full time mud horse fisherman – and Michael Brown – the eel smoker from Hambridge. All in the same breath and chapter asjuvenal, Aristophanes and Alexandre Dumas. Tales are told of an eel farm in the warm waters of Hinkley Point Nuclear Power Station, which could easily have been of use to Julius Caesar, or rather to the organizer of the feast held in his honour. One feast needed 6,000 eels, the same as the annual rent received by Muchelney Abbey for fish weirs on the Parrett. Eels are currency and maybe one day you will be able to pay your tax bill in smoked eels instead of euros. First catch your eel. A whole chapter is devoted to the history of murky people with strange nocturnal habits, in pursuit of nature’s delicacy and yet we are left with a sense of wonder at man’s ingenuity at catching this most elusive of species, whether it be in the Fens around Ely, on the Somerset levels, in the West of Ireland, in the Lower Bann of L’ough Neagh, or further afield in Maine or in the mouth of the St Lawrence River. Amazingly accurate records of fishing techniques were kept by Jesuit priests in the seventeenth century and these observations were sent back in their Retations to headquarters in Paris. Smoked eel was not a luxury, it was a necessity and even eaten on the hoof like biltong. There are eel spears, eel traps, eel nets, bunches of worms, clotting or rayballing. Then there is the second-century AD trick of taking the entrails of a freshly killed lamb and inflating them with a reed, once the eel has swallowed them, a slightly dubious story even as fishy stories go. And that is just for starters. Tom Fort then launches into the genetics of eels, eel migration, the wonders of the Sargasso, the arrival of elvers, glass eels and the habits of the elvermen. Here there are recipes from Izaak Walton, ‘With sweet herbes anchovies and nutmeg, butter and salt’, or as Cockneys do, eels with parsley sauce, or steamed and then grilled in Japanese style. One Japanese book has over 100 eel dishes. This is a fine book and every cook and fisherman should have a copy to remind them that there is a weird wonderful world out there, apart from kippers and oysters. A rare insight into one of nature’s most intriguing mysteries. Highly commended, even if you don’t like the thought of them. JAMES CROWDEN

During the last 30 years of the nineteenth century, almost a quarter of Iceland’s people departed their homeland, responding to a series of dire political and environmental circumstances. In large groups and small (some as few as six), these 20,000 or so souls embarked on long sea and overland voyages to many parts of the New World from Alaska to Brazil. More than a thousand Icelanders, designated the ‘Large Group’ made their way to what is now Manitoba, in western Canada, establishing themselves in the remote Interlake district north of Winnipeg, on the shores of vast Lake Winnipeg, calling their settlement ‘New Iceland’. Descendants of those settlers, though many have dispersed, still identify the area around Gimli with ‘home’. Author Kristin Olafson-Jenkyns is one of those descendants, and she honours the spirit of the New Icelanders in a collection of recipes and reminiscences. Broader than a strictly cookery overview, and touching on other Icelandic emigrant settlements as well, the book reflects life in New Iceland from the late nineteenth century onwards. These are engaging insights into the background of a small but important group of North American settlers. The immigrants brought not only their possessions, but also a great deal of optimism, an intensely ingrained sense of hospitality, a hard-work ethic, and lots of words of advice from the few settlers who preceded them. Practical suggestions were published in the Icelandic newspaper Framfari; instructions for storing root vegetables for the winter and building the ice-house were provided, along with equally serious attention being given to what today would likely be called ‘lifestyle’ hints. From January 4, 1878: ‘I would also advise emigrants to take with them sufficient Icelandic food… and a little good akvavit made from grain.’ This is a ‘community cook book’ in every sense of the word. Recipes have been drawn from old published and manuscript books, there are hand-me-downs from relatives and friends (and a few additions from present-day New Icelanders reflecting a broader range of culinary interests that stretch from Provence to Louisiana). Rituals from daily coffee drinking (fostering family togetherness and welcoming strangers), and holiday activities. Readers from other culinary and historical backgrounds may sense that they have been invited to sit with the family at the kitchen table. Olafson-Jenkyns sent the recipes to representatives of the Icelandic diaspora across North America, exhorting them to try the recipes and to report the results. The flood of memories of aunties’ and ammas’ (grandmothers’) kitchens is heartwarming, as are the comments – not always entirely favourable. ‘Maybe if you had been working out in the field all day and came home to find oat cakes were your only food, you might just eat them,’ suggests one tester. Another tester, more helpful, advises that the prune filling for the classic festive cake vinarterta [Vienna cake] be given a good shot of whiskey. ‘You will never find that in any cookbook though,’ she reports. The reviewer of any cookbook has an obligation to try a few dishes, of course. Some of the trials had quite wonderful results: Mrs. MJ. Matthiasson’s Kanellerta (cinnamon cake) is an ethereal sponge cake sandwiched with lemon filling, the whole enveloped in a meringue and baked. Skyr Cheesecake, made with buttermilk cooked and clotted [one way of creating skyr], laid on an almond crust is lighter and, to my mind therefore, better than many cheesecakes. This recipe, though, suffers from that scourge of the first-edition cookery-book, ingredient error: the almonds are prescribed in the list of ingredients, but thereafter ignored. Not all the experiments had such happy results. Of the ingredients that turn up frequently in the Icelandic kitchen, brown sugar and prunes are two. When these meet (in large quantity) in someone’s grandma’s fish soup, along with a dose of vinegar, the effect is really unappetizing, rather like a fishy fudge sauce. Residents of New Iceland found bountiful aquatic resources in Lake Winnipeg; Olafson-Jenkyns devotes a full chapter to the economic history of the fisheries and another to the recipes that depended from them. This volume was the recipient of two ‘Cuisine Canada’ 2002 book awards, announced at the food industry’s October ‘Northern Bounty’ convention: Gold in the ‘Special Interest – Food and Beverage’ category, and Silver for ‘Canadian Food Culture’. The book is not without its editorial difficulties: instructions for some recipes are vague; the so-called ‘Index’ is only a sequential list of recipes; and copy-editing is lax, resulting in some truly awful word sequences: ‘The name Gyõingakökur [jewish cookies] implies that these cookies have their origins with the Jewish people, coming to be baked in Iceland through Danish influence as did many other recipes’. ANN SEMPLE

Canada’s best-selling cookbook of the nineteenth century, and first Canadian fund-raising cookbook, is given a new lease of life in this attractive facsimile edition. Elizabeth Driver has contributed an introduction which serves admirably to place it in its historical and social contexts. It also deals very well with one minor aspect of the book, that it included recipes from a similarly titled American book, The Home Cookbook of Chicago (1874); this caused some embarrassment in Toronto but is shown to have no real significance with regard to the merits of the whole book. As one would expect, cakes, biscuits, breads and puddings are treated extensively – lots and lots of enticing recipes, many of them attributed to individual ladies. There is also a highly readable and slightly mysterious essay entitled ‘Our Susan’s opinion of a kitchen’, Susan being queen of the kitchen of one of the ladies and having strong views on layout, colours and other matters which can make work in a kitchen a pleasure; she pours effective scorn on those ‘fine houses’ where the main rooms are so large that ‘a regiment might meander comfortably about the furniture’, whereas the kitchen is cramped and accommodates only range, sink, ironing table and – the cook. A further bonus in the book is the fascinating chapter on Social Observances, in which are to be found some astonishingly refined rules for correct behaviour. For example, a gentleman leaves his umbrella in the hall, but carries hat and cane with him, keeping the former in his left hand, never venturing to lay it on table, or rack, unless invited to do so by the lady of the house. Her not doing so is a sign that it is not convenient for her to prolong his call. But I must not allow reflections on these bonus items to obscure the quality of the book as a recipe book. Well worth possessing. ALAN DAVIDSON 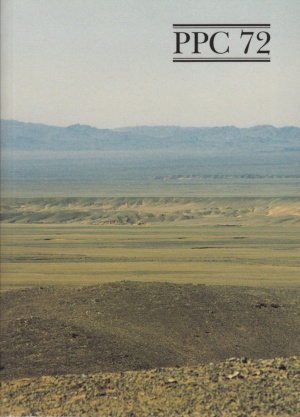