2021 Herbs & Spices Proceedings of the Oxford Symposium on Food 2020

Proceedings of the Oxford Symposium on Food and Cookery 2020

Herbs and Spices (Oxford Symposium 2020) was the first gathering to happen entirely online, as the V-Symp came to be known. We managed to cook a meal together with Sri Owen’s turmeric lamb curry, a memorable achievement for all. We heard about making curry with the spice known as stone-flower, Parmotrema perlatum, a dried lichen fungus. Yes, it was a shame not to touch and smell it, but you can read about its cooking (steamed, fried, you name it) in Priya Mani’s paper. You will discover that in medieval cooking, saffron was used more often than green herbs, for colour of course, but also for that subtle flavour that makes basic food interesting. All kinds of peppers, saffrons, galangal, similar to Thai ginger get a very thorough airing. Fascinating reading, and of course, a warm and welcoming online group that made us all feel a part of a real Symposium, even though St Catherine’s College was far away.

Gastrophysics: The Psychology of Herbs and Spices Charles Spence

The Rise and Fall of Certain Herbs Ken Albala

Season to Measure: Measurements in Early Culinary Recipes and their
Relation to Medicine
Volker Bach

Melegueta or Grains of Paradise: To be ‘Pepperish’
Scott Alves Barton

Travelling with a Hairy Heart, or Where Cooking with Annatto Can Take You
Janet Beizer

Shichimi: The Spice, its Trade, and Centuries of Food Business Survival in Japan Voltaire Cang

From Acapulco to Manila, Culinary Spices to Medical Supplies: Useful Plants Introduced to the Philippines in the Age of the Galleons

The Savoury Course at Oxford and Cambridge Colleges
Paul Freedman

The Road That Spices Travel is No Longer Silk
Peter Hertzmann

Captain James Cook, Scurvy, and the Use and Misuse of Herbs
Heather Hunwick

Just Mad About Saffron: A Note on Jewish Memory and Pharmacology
Joshua Lovinger

What Does Prestige Taste Like? The Divorce of Saffron from its Cultural Context James O’Donnell

‘A Spice of Idolatry’: Seditious Spices and Ginger Anxieties in Jonson’s

‘This is all very well, but where in Ireland can you get fresh tarragon?’: Myrtle
Allen and Herbs: Towards the Creation of an Irish Food Identity
Regina Sexton

Pepper and Paradox in the Roman Imagination
Jeremy Simmons

Ambiguous Aromatic Umbellifers and Other Obscure Characters: On the
Intricacies of Recreating China’s Culinary Past
Robban Toleno

A Twenty-First-Century Spice: A Journey to Madagascar and the Promise and
Peril of the Wild Tsiperifery Pepper
Amy B. Trubeck, Eric Bishop-von Wettberg, and Maya Moore

Herbs and Spices in the Court Cuisine of Medieval Cyprus: Food in the Cyprio-Gallic Style
William Woys Weaver

Food for the Soul: The Rabbis’ Cinnamon
Susan Weingarten

Lessons from the Chilli in China
Gerald Zhang-Schmidt 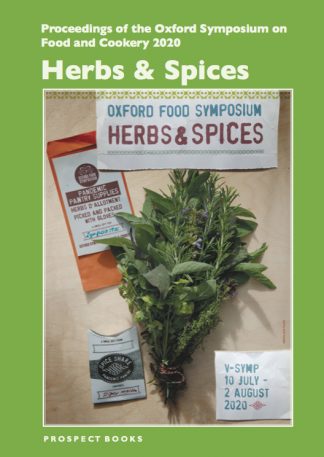