Proceedings of the Oxford Symposium on Food and Cookery 2012

• Proceedings of the Oxford Symposium on Food and Cookery 2012 •
• 32 essays by international scholars •The thirty-first Oxford Symposium on Food & Cookery discussed wrapped and stuffed foods from every possible angle, and from every possible geographical perspective. This may include sausages on the one hand, or stuffed ravioli on the other. It may also go as far as pies and sausage rolls. In geographical terms the Symposiasts were willing to look at cultures as disparate as Turkey, the United States, seventeeth-century England, Korea and Italy.There is also a pan- cultural discussion of stuffing and wrapping foods in avant-garde or molecular gastronomy.Contributors include the Chinese expert Fuschia Dunlop, the Greek cookery writer Aglaia Kremezi, the celebrated food writer and cultural historian from America Laura Shapiro, the Australian food historian Barbara Santich, the Israeli commentator and historian Susan Weingarten, and the English anthropologist David C. Sutton.

Titles of some of the papers include: The Pillsbury Bake-Off: Stuffed and Wrapped in 1950s and 1960s America; Chicken Kiev: Material, Social and Discursive Wrappings; Samuel Pepys’s Venison Pasties; Barbarian heads and Turkish dumplings: the Chinese word mantou; A Knish Is Just a Knish–or Is It? The Evolution of a Street Food to Haute Nosh and Before Dolma:A Taxonomy of Medieval Arab Stuffery. 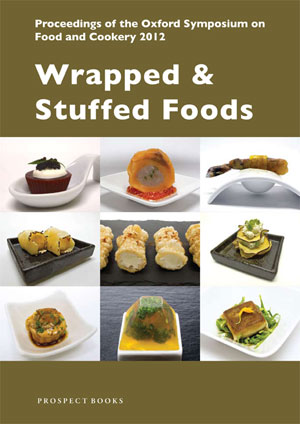