Review of Water of Life from the website www.whisky-pages.com.

Review of Water of Life by Matthew Rowley, from his blog Rowley’s Whiskey Forge at http://matthew-rowley.blogspot.com.

Review of Water of Life from the website www.whisky-pages.com.

More strain for the bookshelves in the shape of C Anne Wilson’s substantial tome Water of Life. Subtitled A History of Wine-Distilling and Spirits 500BC to AD2000, this may sound rather like a Mastermind special subject, but is actually a fascinating and absorbing read for the serious-minded imbiber. According to the cover blurb, “The compelling narrative of wine-distilling is at once romantic, intriguing and unlikely, appearing more the stuff of historical romance than banal reality.” All that, plus footnotes! While the first half of Water of Life focuses on the earlier history of the subject, the rest of the volume is largely dedicated to the British experience of spirit manufacture and consumption from Tudor times to the present day. This is not the lightest of reads, and at £30.00 is unlikely to be an impulse purchase, but it is warmly recommended for anyone with a thirst for in depth knowledge about the heritage of drink and drinking.

Review of Water of Life by Matthew Rowley, from his blog Rowley’s Whiskey Forge at http://matthew-rowley.blogspot.com.

If your family’s closets harbor skeletons, pray that C. Anne Wilson’s attention lies elsewhere. Otherwise she will haul them into the light of day, noting along the way the manufacturer of the doorknob, the origin of light bulbs, the nature of light, and quite possibly the history of hangers, closets, wardrobes, and–in passing–steamer trunks.

Wilson, former Keeper of Special Collections at Leeds University Library has penned in-depth studies on British foodways including The Book of Marmalade and Food and Drink in Britain. This time she has turned her considerable intellect and scholarly prowess to bear on the origins and progress of spirituous distillation in Water of Life: A History of Wine-Distilling And Spirits; 500 BC – AD 2000 (ISBN 1903018463, 300pp, £30/$60).

Understand that Ms. Wilson’s forte is historic British foodways–how, why, what, and with what Britons have eaten and imbibed in the past. If she missteps in her discussion of cocktails in more recent times, she should be forgiven for the study of the history of cocktails is a new field and we have others who take on the task admirably. While I trust authors such as Ted Haigh and David Wondrich for revealing the material culture of mixology, we are fortunate in the third degree that Wilson grew intrigued in modern alcohol’s precedents. In so doing, she’s changed at least my understanding of where my nightly cocktails come from–and the very meaning of alcohol.

Perhaps taking a cue from Caesar’s Gallic Wars, Water of Life is divided into three parts–(1) The Ancient and Early Medieval World: The Eastern Mediterranean Region, (2) The Later Middle Ages: Western Europe, and (3) From Early Modern Times to AD 2000: The British Isles.

To say that the first is dry misses the point. It is also brilliant. Wilson traces the origins of wine distilling not to medieval Europe or even Arab alchemists as nearly every author has ever done (including yours truly), but to the philosopher-chemists of Hellenistic and Roman Egypt, arguing that alcoholic distillation began around 500 BC with the cult of Dionysius. This is about 1,400 years before the introduction of Arab rosewater distillation methods to Europe, and therefore presents alcoholic distillation much earlier in the timeline we’ve come to accept.

Early distilling had nothing to do with beverages or even medicine, she writes. It was instead an ultra-secret practice of religious cults. Unlike the Gideons, however, whose messages grace hotel rooms around the world, the texts of these cultists either never existed or have been destroyed. To get at what they might have held, Wilson examines philosophical treatises, histories, court records against heretics, household account books, paintings, song, and literature.

Because the historical record is so spotty and because, even to this day, distillers remain prone to speaking in circumlocution and code, Wilson makes well-reasoned suppositions and jumps of logic, all the while explaining the symbolism employed by early distillers and the religious language of recipes, even when copied by scribes who didn’t understand that the recipes might in fact have been pre-Christian initiation rites considered by Rome heretical. She is especially adept at tracing the language of secret distilling texts and the vocabulary of still parts through the ages and across languages. In fact, she lays down such a well-structured argument in the first section that by the time she brings up Parzival and the Holy Grail in part two, you realize she’s going to claim it before she does: The Holy Grail was a still.

Yet she’s led us so carefully down the path of Gnostic and Cathar initiation rites and baptism–by still-born fire, of course–that she’s damn convincing. Makes you wonder what the whole water-into-wine deal was about at the Canaan wedding. Holy Spirit? Don’t get me started.

More meaty and familiar for modern distillers and cocktail enthusiasts is the entire second section and much of the third which trace distilling from the later middle ages in western Europe to the year 2000.

Armed with an understanding of Gnostics, Cathars, Jabirians, Nestorians, and Knights Templar as well as the philosophical underpinnings of transformation, transmutation, and the nature of nature, we move beyond the symbolism of primordial distilling and get into liquor distilling as we understand it today. The monastic liquors take on new meaning; brandies, whiskies, and various “waters” enter the picture on a wide scale; and the role of woman in distilling comes into focus. With a duty to manage household expenses, Tudor, Elizabethan, and later generations of women kept stillrooms and household stills for producing various waters and spirituous medicines.

Household manuscripts and early printed works start appearing fast and furious–as Wilson concentrates on home distilling and the business of distilling and the rise of spirits in England, Scotland, and Ireland with occasional forays into North America.

After such an exhaustive examination of the topic, Wilson injects a discordant note at the end as she despairs over ever-increasing alcohol consumption in Great Britain. Anyone who has witnessed packs of drunken British youths descend on Amsterdam during weekend benders will understand her concern, but the last section with its awkward “water of death” line would have stood better as a separate essay.

Don’t let that dissuade you. In an era of unprecedented access to information, moonshiners, home distillers, and professional spirits-wranglers would do well to learn as much as they can about the history and practice of their craft. Here is one book not to miss.

PS: Hats off to the indexer. Putting together a comprehensive, useful, and accurate index is a thankless task. This one is a gem. 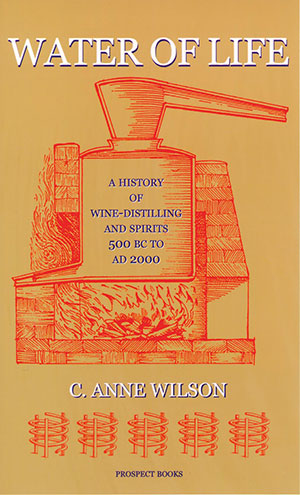