View basket “Building a Wood-Fired Oven for Bread and Pizza” has been added to your basket.
Sale!

This is a reprint of the first volume in Prospect’s series The English Kitchen. The authors trace the development and spread of that quintessentially English dish, the trifle. Relaxing after the labours of the Oxford Companion to Food, the late Alan Davidson and his trusty lieutenant of the last years of its compilation, Helen Saberi, turned their spotlight on trifle. Nothing is more emblematic of English cookery. Trifles have been a perennial of English summer lunches, tennis parties, and schoolboy dreams of plenty. The authors trace their origins to the earliest recipe of 1596 and its gradual transformation from a mere cooked cream to the many-layered custardy extravagance we know today. The stages on its journey, described with the lightest of touch, are illustrated by recipes extracted from classic English cookery books. With their customary brilliance they have universalised the English experience, casting far and wide for examples, returning home with trifles from Laos, America, Australasia, Mexico, Eritrea, South Africa, Afghanistan, Malta, and even Norway, where Veiled Maidens are all the rage at teatime. The resulting recipes, handy tips and historical speculation amount to a ladleful of wit and amusement.. On its first appearance it garnered many appreciative comments:

‘Sparkles with anecdote and generous whippings of erudition,’ wrote Glen Baxter when nominating it as his book of the year in The Observer.‘A fascinating book and a great stocking-filler.’ Mark Taylor, Bristol Evening News. ‘A knees-up romp through jelly, custard, whipped cream and nuts, as the authors dig greedily through layers of culinary archaeology.’ Jill Dupleix, The Times. ‘The result is a gem.’ Orlando Murrin, Daily Express. ‘What a brilliant idea. Another triumph for Prospect Books.’ Derek Cooper.

Helen Saberi has written Noshe Djan. Afghan Food and Cookery. She was principal assistant to Alan Davidson on the Oxford Companion to Food and is currently writing a book on tea for Reaktion Books. The late Alan Davidson was one of Britain’s most distinguished writers on food. His books on fish and seafood and the Oxford Companion have severally been hailed as masterpieces. Prospect publishes not only his seafood books but also his deathless novel, Something Quite Big. Trifle was first published by Prospect in 2001. A sample of the chapter on Desserts is here.  A review posted on Amazon.co.uk by Isabel in the Kitchen, who gave it five stars.

A review posted on Amazon.co.uk by Isabel in the Kitchen, who gave it five stars.

This is a charming monograph on that most quintessentially British dessert, trifle, from the erudite culinary publishing house, Prospect Books. The authors start with the first known recipe to appear in print from the Tudor The Good Huswife’s Jewell and trace it’s development through the ensuing centuries with over ninety authentically written recipes. The trifle’s journey is traced to the New Worlds of Canada, Australia,Mexico etc. and includes close cousins such as Whim-wham, Florence White’s The Dean’s Cream and Meg Dods’ Wassail Bowl and Zuppa Inglese and Tira-Mi-Su.There are a number of electic recipes from diverse places such as Eritrea, Iceland and Germany as well as the recipe Helen Saberi developed for an Afghan trifle, reflecting that country’s culinary tastes. There are even a couple of recipes of the very odd savoury trifle, surely a contradiction in terms! The book is more historical interest than cookbook notwithstanding the plethora of recipes as many of these are repetitive and some downright strange although many of them do promise delectable results and I especially appreciate the Fast-Track Guide on page 6 listing the most practical and exotic specimens for anyone stuck for where to start. The recipes have been tested by the authors and re-written where necessary in the interests of clarity. Personally, the appeal of this book for me is in reading it rather than trying the recipes and there are plenty of snippets of fascinating esoterica. 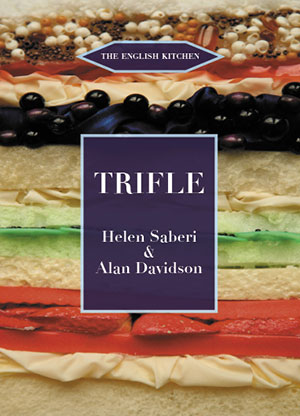