Review by Donald Woodward in The Agricultural History Review

The Neat House Gardens sets its subject, perhaps the most productive 200 acres of land in England in the seventeenth and eighteenth centuries, into the wider context of horticulture and food supply in the London area, and will be of general interest to agrarian historians as well as those with specific interests in food supply and the capital. Neat House Gardens disappeared in 1825, when Thomas Cubitt bought out the reluctant gardeners for building, and are now visible only in the ramparts of Dolphin Square, and the rectilinear grid pattern of the surrounding Pimlico streets. First brought into garden cultivation around the beginning of the seventeenth century, Neat House became one of London’s principal sources of supply for cauliflowers, cabbage, artichokes and asparagus, with early beans and catch crops of spinach and radishes. Low-lying, with a high wafer table, the land finely balanced drainage and irrigation, and was supplied with copious quantities of manure from London’s laystalls to maintain fertility and fuel the hot-beds under glass that were the secret of early and unseasonal crops. Middleton (1798) put its yields at £200 per acre, when ‘farming gardeners’ who mixed spade and plough, won only £50. Little wonder, then, that Neat House acted as a national centre of excellence, and training ground for the gardeners of the gentry. The Grosvenor estate records are supplemented by a wide range of archival sources, and extensive use of contemporary printed books. Both garden manuals like Sharrock or Switzer, and household and cookery books, set Thick’s subject into the wider context, though, sadly, there is no bibliography. Direct documentary evidence is more scarce for much of the eighteenth century, and this leaves tantalizing loose ends: records of the Gardeners’ Company, in which several Neat House families were prominent, are poor for much of the period, and the precise relationship of the two cannot be defined. While ranging from the sixteenth to the nineteenth century, the focus of this book is thus the later seventeenth century. Despite these handicaps, it raises interesting wider questions: there is an excellent introductory essay on vegetable production around the capital, and the mixed mode of ‘farmer-gardening’ is analysed to explore wider issues of the transmission of crops from garden bed to field. Huge labour inputs favoured the adoption of labour-saving technologies, principally drilling, sowing in rows, and horse-hoeing. Markets and marketing, including direct sales on site, lubricated by the gardener alehouses that gave Neat House a modest resort function, are discussed effectively, and we even glimpse the gardeners’ houses through the record of a 1675 survey. This book thus extends far beyond an obscure corner of seventeenth-century London to demand the attention of the historian at work; at leisure, seeking the secret of winter beans; or merely curious about the contemporary adage, ‘no turd, no gardener’.

Review by Donald Woodward in The Agricultural History Review

As Malcolm Thick explains, ‘Market gardening is the Cinderella of garden history, or perhaps to call it the Ugly Sister would be more descriptive’ (p.11). Thus, it was his aim to redress the balance and write a general history of market gardening around London. He may well do so in the future – and he devotes three chapters to the more general history in this volume – but he was deflected by the desire to share his findings related to a single ‘cabbage patch’, as Shakespeare dubbed Denmark. The Neat House gardens began their life as an area devoted to the production of vegetables for the Westminster and London markets at the beginning of the seventeenth century. The extent of the gardens, located on the site of modern-day Pimlico, was never large, rising from an estimated 17 acres in 1614, to 39 in 1622 and at least 107 in 1675, but they were highly productive and the gardeners enjoyed reputations as the best in the country. High levels of production were achieved through advanced techniques: thorough tillage using spades and other hand implements guaranteed good soil quality; hot-beds were constructed using huge amounts of night soil and street sweepings from the capital; glass bells also helped to extend the growing season; and cultivation in rows ensured that not a square foot of earth was wasted. The gardens produced a wide range of vegetables for middle and upper income tables but they became particularly renowned for the cultivation of asparagus and melons. Some produce was sold direct to customers or their servants who called at the gardens, although much was taken down the Thames into the City and Westminster.

Perhaps the most important question to ask about the significance of the gardens is whether or not the expertise fostered there had a significant effect elsewhere. It appears that the answer is firmly affirmative as far as gardening is concerned. The gardeners adopted an open door policy, inviting inspection and profiting through their sale of food and drink to visitors; there is no doubt that the kitchen gardens of the gentry benefited as a result. The effect on agriculture is more doubtful. The advocacy of thorough tillage may have had some effect although experiments with digging in agriculture were soon abandoned. However, the discussion of other garden-based developments including row cultivation and hoeing continued and may have received some impetus from those who visited the gardens.

Malcolm Thick’s greatest disappointment is that few business records relating to the operation of the gardens have survived. Thus we know very little about the levels of man- and woman-power needed to keep the earth in good heart and bring forward its wonder crops year after year. Similarly, there is only a small amount of probate material to suggest levels of wealth and life-styles, although some benefit can be derived from the hearth tax returns for 1664. The majority of gardeners seem to have been comfortably off; of those assessed for the tax – and a few were not – half lived in houses of five or more hearths; most of the rest lived in three- or four-hearth houses. Moreover, some of the gardeners rose to positions of authority in the London Gardeners’ Company. Eventually urban pressures grew too great for the gardeners and their days were ended by house-building at the start of the second decade of the nineteenth century. Small in scale, rich in significance and output, Malcolm Thick is to be congratulated on opening up this small corner of exceptional productivity to the gaze of garden and agricultural historians. 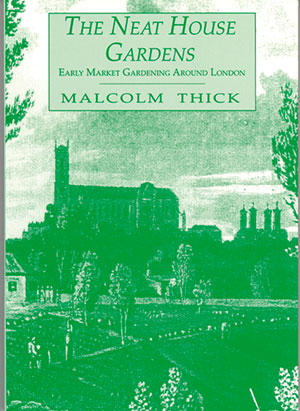