A PDF of the preliminary matter of Taste or Taboo, and below, a review by Chris Hirst in The Independent.

A Review of Taste or Taboo from Mr Rob Hardy of Columbia, Missippi

A Review of Taste or Taboo from Mr Rob Hardy of Columbia, Missippi

Brillat-Savarin, the philosopher of the dining table, said, “You tell me what you eat and I will tell you what you are.”  He might have been able to tell even more if he knew what you refused to eat, especially if you refused to eat it not because it was simply not to your taste but because it was a dietary restriction that your society or religion placed on you.  In the times of the ancient Greeks and Romans, there were plenty of food restrictions beyond what foods could be gotten depending on the season and the cost.  In Taste or Taboo: Dietary Choices in Antiquity (Prospect Books), Michael Beer examines the sometimes strange behavior of the ancients regarding food, but reminds us that it is not all so strange.  Beyond the seasonal and regional lack of availability of different foodstuffs, people then and now restricted intake because of religious or cultural beliefs, the need to curb dietary intake for philosophical reasons, or  special diets required by medical conditions.  Beer points out, “Drawing parallels between the ancient and modern world is a perilous endeavour,” but also shows that just as the ancients are part of our artistic, philosophic, political and scientific legacy, we can find many of their dietary fashions, restrictions, and opinions similar to our own.

In an examination of the topic with some depth, Beer enjoys playing with superficial similarities.  He opens with Nero who used enemas to stay skinny and Claudius who induced vomiting so that he might be able to gorge himself again.  Anyone who has read Homer knows that with all the feasting by those heroes, there is little mention made of salads or Brussels sprouts, and Beer jokes, “The heroic warrior-caste described by Homer in the Iliad, for instance, seem to exist on a proto-Atkins diet almost exclusively of meat.”  This shows that literary sources may be a questionable way to get dietary data.  Meat was sparse in the ancient diet, but Homer concentrates on it as a feast food, often in the context of sacrifice.  Eating meat was part of their civic duty for warriors.  Refusing to eat meat, and there were some non-warriors who did so, was regarded as decidedly peculiar.

But there were plenty of peculiar people back then.  One of the characters who wanders through this book frequently is Pythagoras.  He is pivotal in considering ancient vegetarianism, although much of what was written about him is contradictory because it was written long after his death and we have no writings of his own.  He is far more familiar for his (or his followers’) mathematical ideas, but he led a cult with various food restrictions.  He said that the gods should not be honored by blood sacrifice, but that baked goods could be sacrificed in their stead.  He believed in austerity and in abstinence from animal flesh, but it seems that he may have advocated that athletes eat meat.  Quite possibly those who wished to be in his inner circle stuck to strict vegetarianism.  He had a strong taboo against beans: “Wretches, utter wretches,” he implored, “withhold your hands from beans.”  There was even a story that when a general wanted to round up some naughty Pythagoreans, he cornered them outside a bean field, into which they could not flee.  Beer doesn’t mention it, but Bertrand Russell jokes in his A History of Western Philosophy about the difficulty Pythagoras had of keeping his cult together:  “But the unregenerate hankered after beans and sooner or later rebelled.”

The bean taboo was far more widespread than just the Pythagorean cult.  It would seem that if meat was a food only the wealthy or the warriors could rely upon, then beans would be an acceptable alternative source of protein.  It may be that Greece and then Rome adopted the taboo against beans from even older traditions in Egypt.  We cannot expect to find good reasons, or even bad ones, for the origin of the taboo, but Beer finds that the ancients gave rationalizations for it.  Beans caused flatulence or stomach upset, some of them said, which interfered with any state of purity.  It is commonplace to cite Aristotle on any of the diverse subjects upon which he wrote, but he is no help on the bean taboo.  He suggested that beans resembled testicles (this does sound like a genuine and primitive origin for the taboo), that they have “a harmful nature,” and that “they are like the nature of the whole.”  If you find this incomprehensible, so does Beer.  More sensible is the idea that beans do have toxins in them, and some people with a particular enzyme deficiency, for instance, will be poisoned by fava beans, and the deficiency is found in Egyptian populations.  If so, why Pythagoras and the rest had to cloak their warnings about beans in allusive language rather than issuing medical warnings is not clear.

Less widespread than the taboo against beans was one against fish, one complicated by a gradual change from a prohibited item to a luxury one.  Fish were viewed as predatory creatures; they would, for instance, eat sailors lost at sea.  Their adversarial relationship to humans may have been part of the initial taboo.  The Odyssey mentions the eating of fish, but only to stave off starvation.  It was not a food for heroes, and Plato associated the eating of fish with profligacy and weakness.  The Romans had this attitude, too; fish indicated luxurious behavior, with all the scandal they associated with such luxuries.  Fish, then, were a sign of corruption, and may have instigated it.  Beer also has a chapter on alcohol, which for possibly better-grounded reasons was regarded as a danger to the individual and to the state, with many literary accounts of detrimental effects on the ruling elite.  Like many of the foods he examines here, alcohol and taboos upon it functioned to emphasize exclusion and inclusion.  Wine drinking, for instance, was regarded as a token of being a citizen of a civilized nation, as opposed to the barbarians who swilled beer.

If tradition were not strong enough to ensure that people did not break a taboo, there was always law.  There were sumptuary laws in both Sparta and in the Roman republic.  In both cases, the laws presumed to ward off the evil of the influence of outsiders.  Plato, for instance, recommended that an ideal location for a city would be away from the coast where the inhabitants would brush against foreigners and foreign goods.  The inhabitants of the Ionian city of Colophon were corrupted and made degenerate, the story goes, by their associating with the Lydians; we can just imagine that there were plenty of racist jokes made at the expense of those bestial Lydians.  The common-mess meal of the Spartans was free of luxuries, part of the impetus to discourage individualism.  In Rome, the aristocracy enjoyed lavish spending, and there was a series of laws to keep them from doing so, each in the series required because the previous ones did not work.  Among the laws were those that said that dinner parties had to be held in the open or with open doors; not only could officials thereby know what was being consumed, but  also they could restrict the tendency of those aristocrats to plot together.  Overeating was thought to be part of the decadent East, and corpulence was regarded as a manifestation of an inner lack of seemly control.  Gluttony was the sin of tyrants.  The idea that abstinence was a virtue was, of course, to be taken up by the early Christians.

Repeatedly, in examining dietary taboos of Greeks, Romans, Jews, Egyptians, and subsets thereof, Beer shows how food restrictions could help a society unite in self-identification, and could also exclude others and demonstrate how those others ought to keep themselves apart.  It is one of the charms of Beer’s book that as strange and counterintuitive as some of the food restrictions may seem to us, we still have our own taboos and some of them reach back through millennia.  Vegetarianism, for instance, in ancient days was “tainted with a refusenik reputation, a rejection of conventional pieties and rituals.”  Though vegetarianism is now widely accepted, it’s still different, and only a few decades ago was broadly regarded with hostility or distrust which has finally begun to fade.

Review of Taste or Taboo by Chris Hirst in The Independent.

“Drawing parallels between the ancient and modern world is a perilous endeavour,” warns Beer, but it is hard not to feel strong resonances in this study of classical pickiness. We learn that the young Nero, keen to forge a career on the stage, “tried to keep excessive flab at bay by repeated use of enemas”. The elevation of fish from “despised and marginal” to “symbol of luxury” also sounds familiar. Though vegetarianism was advocated by a few ancient moralists, “it is likely that thoughts about [it] never entered the minds of the majority.”  Other aspects of consumption seem far from the modern world. Beer says it is “quite startling” that concern about alcohol was limited to its effect on the ruling elite. Equally odd is a taboo on beans. This may have been due to “unfortunate physical effects” though Aristotle suggested it was because they were used in ballots. Then as now, people were wary of bean counters. 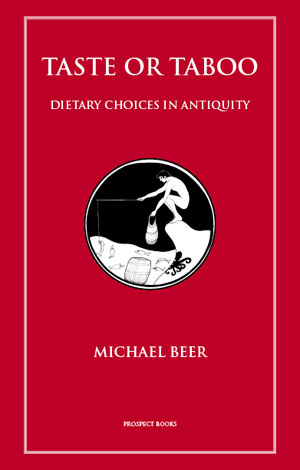 You're viewing: Taste or Taboo £9.00
Add to basket