Sud de France: The food and cooking of the Languedoc

PDF of the prelims and some sample pages.

When Caroline Conran’s latest book Sud de France (Prospect Books) popped through the letterbox, I found myself engulfed in a wave of nostalgia. It wasn’t just the subject matter, although as a Francophile with a foothold in Normandy her in-depth look at the culture and cooking of the Languedoc was always going to prove fascinating.

It wasn’t so long ago that I began my journey as a self-taught cook, and the books that I cut my teeth on were almost exclusively black and white, illustrated perhaps with a few woodcuts and drawings, by authors such as Alan Davidson, Jane Grigson, Julia Child, Arabella Boxer and Elizabeth David.

A large part of what I enjoyed about that process was the demands it made of my imagination, reading through the recipes and trying to conjure the finished dish in my mind. As an author I have been the first to capitalise on photography, but as a cook I am equally at home with a cookery book lacking such illustrations, another favourite being Simon Hopkinson and Lindsey Bareham’s Roast Chicken and Other Stories.

As it was, my husband nabbed Sud de France before I had a chance and read it cover to cover in a matter of days. He has been cooking voraciously from it ever since. Unheard of. But as Tom Jaine, who runs the small independent publishing house Prospect Books, told Conran, “you’ve written a book, not a recipe book”. A slow and cathartic process, it was written over a period of some 10 years, “I kept adding to it”, she says, “and then when I met up with Tom it all happened quite quickly. I do love Tom.”

It was a happy ending after a slightly wobbly start when another larger publisher told her, “you’re not a chef and you don’t have a television programme, we’re not interested”. “I was surprised and shocked,” Conran said, “but I’m much happier with it this way, although Sophie [Conran’s daughter who also writes cookbooks] likes to be able to see what she makes.”

She is not the only one. Statistically, while 10 people will cook a recipe that is illustrated with a photograph, only three will attempt one that doesn’t have a picture. This is a shame really, as the selection of recipes to be photographed is almost always based on how well a dish is likely to look, and not on how good it is to eat.

Some would argue that cookery books have crossed the divide into coffee-table books, and certainly there are plenty of titles out there that are most likely to be enjoyed with your feet up on the sofa rather than being of any genuine use in the kitchen.

One publisher that has been particularly successful in addressing this dilemma is Phaidon Press, which specialises in books on art and architecture. The books on Phaidon’s cookery list are as individual and stunning in their production as their content. I could happily sit and peel open page after page of Salma Hage’s The Lebanese Kitchen, which look as if they have been cut by hand with pinking shears, or for that matter, sit and stroke the clothbound cover of Magnus Nilsson’s magnum opus Faviken, the extraordinarily recherché Swedish restaurant, with recipe titles that read like short poems: “a tiny slice of top blade from a retired dairy cow, dry aged for nine months, crispy reindeer lichen, fermented green gooseberries, fennel, salt.”

The photographs are raw, almost dreamlike. “We don’t use food photographers and we don’t use stylists,” says Emilia Terragni, Phaidon’s editorial director. “We approach a cookery book in the same way as an art or academic book, first we commission a designer and this implements the book and its clarity.” This is typical of her very particular sense of direction.

In 2005, Terragni had been grappling for some time with how they might best extend their specific vision and look to include cookery books. A chance meeting in Milan set her thinking about The Silver Spoon, the Italian classic of some 2,000 recipes that she’d grown up with, as had her mother and grandmother.

It proved the first in a series of books based on “national cuisines, aimed at real cooks, with very good recipes. They are authentic and to do with exploring the cooking of a particular country”. She is uncompromising in that authenticity. “We were advised to take out the chapter about offal for the US market. But I said, there are plenty of other recipes to cook from in this book if you don’t want to cook offal, this is how Italians cook.” Terragni stuck to her guns. The book sold 1.2 million copies.

For most mainstream publishers, however, internationalism is a double-edged sword. On the one hand, it is the multiple co-editions that lead to a level of sales that paves the way for the costs of producing glossy full-colour titles. Kyle Cathie, who has grown Kyle Books into one of the largest independent publishers of cookery titles, estimates this cost at around £25,000-£30,000 per book. Keeping every different country happy also necessitates the watering down of cultural authenticity. If it is “too British” it might upset the French, “too German” and it might not sell in the US. So increasingly cookery titles reflect a globalisation of food and cooking.

And what of the future? To date, e-books have largely passed the cookery book market by, but this will almost certainly change as Kindles and their ilk become ever more sophisticated. This February, Cathie publishes her first title with a QR code (Simple Asian Kitchen by Ming Tsai and Arthur Boehm), a sort of digital “scratch and sniff”, whereby you click your smartphone over a small bar code next to the recipe that takes you through to the author’s website where you can download the shopping list and watch a video of how to make the dish.

Will Conran be taking advantage of digital scratch and sniff? “You know, I have in a mind a novel next, set in these prehistoric caves in the Languedoc. It’s about a very powerful man who gets lost in them and loses his marbles,” she says mischievously, in a thinly veiled reference to her ex-husband Terence. “I don’t know if I’m being nasty.” I don’t think she’s capable of nasty.

Amid the torrent of glossy blockbusters and TV tie-ins, significant new culinary works are liable to be swept aside. Caroline Conran’s relishable account of Languedoc cuisine is that extreme rarity, a cookbook that you can sit down and read. She explores the cultural and agricultural background to the robust food of this somewhat reluctant region of France. Seasonality, foraging and a passion for offal are part of life rather than fashionable shibboleths.

Conran’s suggestion that “in the Languedoc everyone enjoys life” may be somewhat sweeping – it didn’t apply to the local who barged into me in a Perpignan supermarché (”Pah! Un rosbif!”). But it certainly has an impressive number of gastronomic celebrations. The killing of the household pig, “often called ‘the minister’” (the region is notably irreverent), was “the biggest family fete of the year” – celebrated with a pork and offal slurry called fréginat. In the Gard, “a wedding was not complete unless the brothers and sisters of the bride and groom ate raw onions”. Not such a hardship since the region boasts “the most delicate and delicious sweet onions”.

Right now it’s peak time for black truffle fairs, “chaotic, competitive and exciting”. At the opposite end of the price spectrum, she recommends the turnips of Paidailhan, “treasured for their dense, frost-white flesh and sweet flavour”. A farmer gave her an intriguing recipe for “sweet and salty turnips” but said she had to wait for three days “so they could imbibe the rain that had fallen, to plump themselves up.”

You should also postpone cooking cassoulet if it’s stormy (”There seems to be some sort of sympathetic magic going on between beans and low atmospheric pressure, and they may turn on you”). A dish called cowhand’s oxtail reveals that Camargue cowpokes enjoy far superior catering to their counterparts on the US range, while mariner’s sauce is an onion and anchovy reduction that “works wonderfully” with steak. As this book demonstrates, pretty much everything is better in Languedoc. 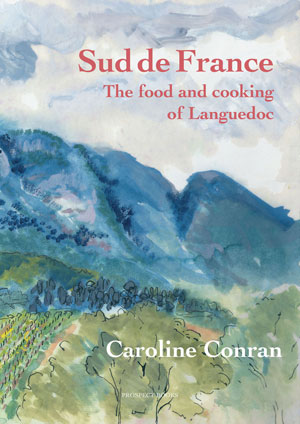 You're viewing: Sud de France: The food and cooking of the Languedoc £15.00
Add to basket