Seeds: Proceedings of the Oxford Symposium on Food & Cookery 2018 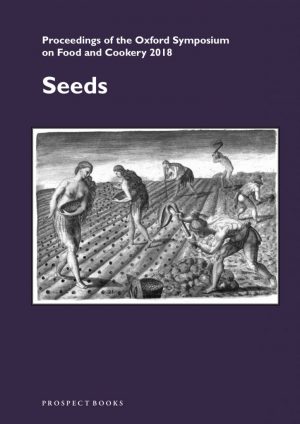 'The sights could not be more different. In one, curved greenhouse-like buildings rise gently from the wildflowered English countryside; in the other, an angular metallic shape juts starkly out of a snowbound Norwegian mountainside. And yet both – the Millennium Seed Bank at Royal Botanic Gardens, Kew, and the Svalbard Global Seed Bank – serve at once as witness to the widespread destruction of the Anthropocene and as ark-like hope for surviving those same collective acts of self-harm.' Mark McWilliams, Foreword, Seeds

The papers in this collection explored topics ranging widely from what was once seen as the promise of irradiated seeds to the many threats to indigenous species, from the way individual grains shape communal identity to the role of seeds in religious symbolism.  Crops are grown for different reasons, and not always to nurture the community that cultivates them. Economic boom and bust cycles can influence the choice of crops, and as  one region becomes the main source for a species of plant, perhaps a cash crop like coffee, at the same time the climate in another region changes, and the harvest falters.

The topics ranged from prehistoric to high-tech ways of planting seeds. And yet the papers often share an unexpected similarity: though many explore the specific context of seeds in the past and others lament that loss in the present, both approaches share a sense of the way landraces – individual species carefully adapted to specific geographies and climates – capture a sense of place.