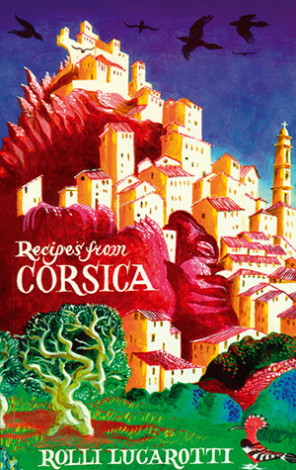 Corsica is a favourite destination for English tourists for the beaches, mountains, forest and the people and their hospitality. Yet there is nothing available in English on the cookery of the island, even though it is distinctive, deep-rooted in a long history of separate development from its larger neighbours, and has those particular characteristics so beloved of enthusiasts for Mediterranean cuisine – in spades. Traditional recipes have been sought out by the author and are given here in cookable detail. There’s lots about pigs and goats and lamb, some wonderful soups and vegetables and many dishes based on chestnut flour. And if you need to stuff a pig’s stomach, here’s the book for you. A PDF of the preliminary matter and introduction to Recipes from Corsica A PDF of some vegetable recipes from the body of the book Recipes from Corsica Readers’ reviews from Amazon.co.uk (five star) Review from French Magazine

At last a book about Corsican cooking. For those of you who have been travelling to the island with pleasure over the past years here is the book with absolutely all of the best traditional recipes. The recipes are really well explained and are quite easy to make - I’ve already made several and have had only praise from my family and guests. What I also really appreciate about this book are all of the anecdotes told before the recipes; they give you a sense of the place and what the author experienced whilst living there. The paperback format is really pleasing as is the typography and there are nice black and white drawings throughout the book. As I said this book is for those who already know and love the island (like me) but also for all of those who want to find out more about Corsica. It’s a must have! Took this on holiday to Corsica and used it a lot. There isn’t much left to say about Corsican Cooking after you read this. Most of the recipies are easy to follow and easy to source. UK alternate parts are provided if you use it at home. This book made my holiday even more fabulous.

If you want to give your taste buds a treat, check out this book. Tried and tested by the author, restaurant-owner and Corsican resident, Rolli Lucarotti, it catalogues recipes and food history and traditions from the island. Corsica is a great favourite with tourists but recipes have always tended to be passed down from generation to generation without being written down. Now you can have the distinctive flavours and scents of typical Corsican fare in your own home. From seafood specialitites like Baked sea bream with herbs to Pig’s stomach stuffed with chard (and yes, Ms Lucarotti shows you how…), from excellent cheese dishes like Brocciu and anchovy tarts to hearty soups, there is something in here for everyone, all clearly explained and all with Mediterranean flair. My one gripe would have to be the lack of colour photos of the dishes. Its always nice to see what you’re aiming at when cooking recipes.