95   No Bread with one Meatball David Miller, Pat Miller and James Tweedsmouth

Di Murrell’s article on Purslane is below:

Though this seems mostly to be translated as ‘good woman’s soup’,
I do believe it should be more properly called the ‘good wife’s
soup’. This would explain the presence of sorrel and purslane
– both greens high in minerals and vitamins to keep the family
healthy and something with which the medieval cook would
have been quite familiar. Today, although the soup is well known,
modern-day recipes never contain these two original ingredients
which without them rather makes nonsense of its name. This
one is from Lindsey Bareham’s A Celebration of Soup. I think it
is as close to the original that one is likely to find though I have
reintroduced the two essential missing ingredients. I suspect that
in its simplest and earliest form the butter and cream would not
have been part of the recipe.
40g butter
1 good handful each of purslane and sorrel, chopped
2 large leeks, finely sliced
450g potatoes, peeled and diced
1.1 litres water
½ teaspoon sugar
50ml single cream
sea salt and freshly ground white pepper
some sprigs of fresh purslane to garnish
Sauté the sliced leek, chopped purslane and sorrel in the butter
until the leek has softened. Add the potatoes, a generous pinch
of salt, the sugar and water and cook covered until the potato is
tender. Mash with a potato masher, then pass through a fine sieve.
(Resist the desire to purée it in a blender as this process makes
the potato taste ‘soapy’.) Stir in the cream and garnish with fresh
purslane. Serve either hot or cold. Serves four people.
Purslane Pitta Sandwiches with Tahini Dressing
This one I found on the fascinating website <hungerandthirstforlife.
blogspot.com> and is a more modern take on how to use purslane.
It makes a speedy and delicious lunch. I love it.

2 tablespoons of tahini paste
lemon juice to taste
a drizzle of olive oil – enough to thin the mixture slightly
a small clove garlic ground to a cream with a little sea salt in a
mortar
sea salt and fresh ground black pepper
For the pitta sandwich
pitta breads – probably two per person
garden-grown tomatoes, sliced and salted
crumbled goat’s cheese or feta or even fresh mozzarella
lots of chopped purslane
Mix the tahini dressing in a jar with a lid. Give it a good shaking,
taste and season, adding more lemon juice and oil as you like.
It should have the consistency of a salad dressing, so thin with a
little water if you need to.
Place all the chopped purslane in a bowl, drizzle on a good
quantity of the dressing, and toss it so that all is evenly coated.
Warm the pitta breads. Fill the pitta pockets with the cheese along
one side and the tomatoes the other. Cram the space in between
with the dressed purslane.
This is summer on a plate.

Wash the purslane leaves and dry them. Put them in a salad bowl
with the spring onions sliced into thin rings. Slice the cucumber
into slivers – a swivel potato peeler works well – and add to the
bowl. Dress with the olive oil and lemon and season well. Serve
immediately. For two people.

This is a recipe from one of my favourite cookery books, The
Cook and the Gardener. I keep it near me in France and often
consult it before I set off for the Saturday market. It was written
by Amanda Hesser, an American learning her culinary trade by
spending a year cooking for Anne Willan, the author and owner
of the famous Ecole de Cuisine La Varenne, at her seventeenthcentury
château in Burgundy. Comparatively speaking, our own
home in Burgundy is more of a peasant hovel but we do share
very similar tastes in food and I feel particularly close to Amanda
as she tries to assimilate and come to terms with the mix of old
and new France in both the kitchen and the garden.
This dish makes a good lunch on its own and goes well with
grilled garlicky sausages or some slices of fried boudin noir.

In a medium saucepan cover the peeled potatoes and bay leaves
with cold water, add a good pinch of sea salt, put on the lid and
bring to the boil. Reduce the heat and simmer until the potatoes
are cooked. Drain and allow to cool. Cut into ¼-inch cubes.
To make the dressing, whisk together the mustard, lemon juice,
white wine and a little pinch of sea salt. Make sure the salt has
dissolved before adding the olive oil. Whisk it in to amalgamate
all the ingredients.
In a medium bowl combine the potatoes and onions and
pour on the dressing. Fold everything together well, but gently,
to ensure the dressing is distributed evenly. Taste and add more
salt if necessary. Leave to marinate for up to two hours at room
temperature.
Just before serving, in a separate bowl, toss the purslane in a
little more oil, lemon juice and salt. Check whether the potatoes
need any more oil as they tend to absorb liquid. Divide the
purslane equally between four plates and serve the potato salad
on top. Sprinkle with coarse ground black pepper and the lemon
zest. Serve at room temperature. For four people.

Another zingy recipe from the hungerandthirstforlife website.
The writer says they learned this dish from a friend, Rosa, who
learned it from her granny. It has a distinctly Mexican feel to it
especially as it is recommended that it be served with homemade
refried beans and a stack of warm corn tortillas. The original
recipe uses tomatillos but I have substituted tomatoes as I think
they are more easily available to most of us.

Wash the tomatoes and cut the onion in half (no need to peel
it). Place the tomatoes, onion, chillies, and garlic on a grill over
high heat. Grill each until they are tender and have some nicely
charred bits. Throw the cooked tomatoes, onion (remove the
charred outer layers first), chillies (stem removed, but leave the
seeds), garlic (peeled), as well as the salt, sugar, and cumin into
a blender and coarsely process them. Heat the olive oil in a pan
and when the oil is warm pour in the contents of the blender and
stir for 2 minutes. Add the chopped purslane leaves, stir, and let
it cook for another minute or two. The purslane will have just
barely cooked through but will have also thickened the sauce.
Remove the pan from the heat and stir in the coriander. Serve as
recommended above.

Back to the more classic French style, this is from La Cuisine de
Madame Saint-Ange (Larousse) and is also to be found in Jane
Grigson’s Vegetable Book. Mrs Grigson says that Mme Saint-Ange is
at pains to point out that purslane gives the soup ‘une onctuosité
toute speciale’ and also insists that the peas be tender-skinned.
As the soup is neither sieved nor pureéd she is concerned that the
pea skins should not be tough. Young fresh peas or good-quality
frozen commercial ones are fine to use

Chop the purslane leaves very finely. Remove the stalks from the
sorrel and chop the leaves as well; chop the chervil. Soften half
the butter in a heavy pan and add the onion. Cover and leave
on a low heat for the onion to stew gently to a purée – about 45
[ 63 ]
minutes. Stir with a wooden spoon from time to time making
sure that the onion neither sticks nor browns. Add the hot water
and salt. When it comes to the boil, add the peas, the purslane
and sorrel to the onion purée and leave to simmer very gently for
a further 45 minutes. Remove from the heat and stir in the rest of
the butter and the chervil leaves. Serve immediately

And finally, where I first came in – with my discovery of purslane
in the ancient Moorish salad of fattoush. This one is based upon
Claudia Roden’s, from her Book of Middle Eastern Food. The
ingredients and their proportions can be varied according to taste.

1 large cucumber
sea salt
a half or a whole pitta bread, slightly stale or dried in the oven
juice of two lemons
4 ripe but firm tomatoes peeled and chopped (Italian, French
Marmande or Ondine Cornu work particularly well as they
are quite fleshy)

Slice the cucumber and leave to drain with a sprinkling of salt
in a colander for about an hour. Then rinse, dry and chop well.
Break up the pitta bread into small pieces and put in a salad
bowl big enough to eventually hold all the ingredients. Moisten
the bread with some lemon juice. Add the cucumber and mix in
everything else. Add the oil and lemon juice a little at a time at the
end, adjusting the flavours to your taste. Season with salt, pepper
and sugar. The secret to this salad is to have everything uniformly
finely chopped and to finish by gently mixing everything together
to combine all the flavours. Eat straight away. 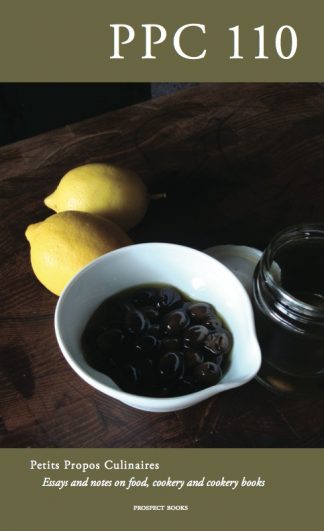