On Chestnuts The trees and their seeds

The trees and their seeds

In England the horse chestnut or conker is a much-loved tree. Its edible cousin, the sweet chestnut, is valued here in winter for a turkey stuffing or a bag of hot nuts from the brazier, but is much less common than in warmer southern climes where it has been an actual staple of the diet of some regions, as well as a crowning delicacy of sweet shops, pâtisseries and charcuteries.

In fact, the horse chestnut is a relative newcomer, not arriving in Europe (from its home in northern India) until the 16th century. The sweet chestnut, originating in Asia Minor, has been with us since the earliest classical times. Both species have medical healing properties: the horse chestnut is used to treat respiratory problems in horses (hence, perhaps, its name) and many vascular complaints (varicose veins, poor circulation) in humans. It is an essential component of Bach’s Rescue Remedy. Its wood, not much used in construction, was once widely employed in making artificial limbs.

The sweet chestnut, by contrast, is a matchless timber. The trees attain great size (the trunk of the largest, in Sicily, was measured at 62 metres girth), and great age. Its importance to European diet has led to its being called l’arbre à pain by the southern French. Its high vitamin C content meant that it was once a popular cure for scurvy. Most importantly, it was an important ingredient in Italian, French and Spanish cookery. Ria Loohuizen includes about 50 recipes for things as varied as a terrine of chestnuts and wild mushrooms, a breast of duck with chestnuts, pancakes made with chestnut flour, and the famous Italian chestnut cake Castagnaccio. She also gives useful hints about roasting nuts on an open fire, choosing fresh nuts in the market-place, grinding chestnut flour, and making that best of all sweetmeats, marrons glacés.

A PDF of the preliminaries, the opening remarks on the sweet chestnut, a few recipies, and the index 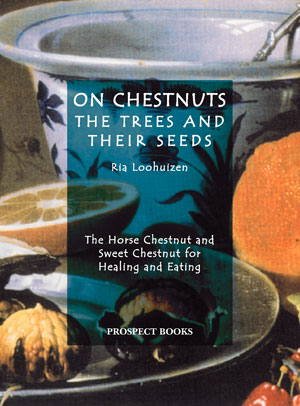 You're viewing: On Chestnuts The trees and their seeds £7.50
Add to basket