Dispatches to the Daily Sketch

• One of England’s best-loved authors on foods, crafts and customs •
• Classic articles describing English country life •
• Not published since their first appearance in the 1930s •
• The subject of a BBC4 documentary in November 2012 •(Foreword by Lucy Worsley; introduced by Adrian Bailey.)

Dorothy Hartley (1893–1985) is an author revered by enthusiasts for old English food and cookery and English country life. Her many books on these subjects, often illustrated with her own drawings, are collectors’ items. Her greatest book, Food in England, has remained in print since its first appearance in 1954.

During 1933–1936, she was commissioned by the Daily Sketch newspaper to write articles describing the English countryside, old English crafts and customs, country foods and country ways (with the odd excursion to Wales, Scotland and Ireland). She did her research in the British Museum (she had by then written several books of social history) and on the ground, travelling around the country on her sturdy bicycle, staying with her subjects, or under a hedgebank if no other choice.

These articles were to form her knowledge-bank which she used in several books that came out during the 1930s and beyond (particularly Here’s England, 1935), but they have never been seen as they were first written. We offer a selection, with a foreword by Lucy Worsley (who is presenting the BBC TV documentary on Hartley to be transmitted in November) and introduced by the writer Adrian Bailey (who befriended Dorothy Hartley in her later life). The 65 articles are illustrated with some of Hartley’s own snapshots which she kept as notes for future reference. The subjects range widely over matters as various as thatching, clog-making, eels, the country chemist, marram grass, sand shoes, crabs, sheep shearing, spring-cleaning, country kitchens, ploughing, weather lore, and elevenses. It will be a classic.

PDF of the prelims and some sample articles. 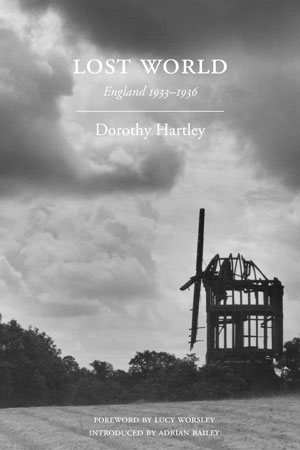