Jellies and Their Moulds

Jellies and Their Moulds

Peter Brears has a long acquaintance with jellies in every guise. He was fed them in childhood, he turned to curating their moulds and associated artefacts while director of York and Leeds museums, he has made them for innumerable historical food shows and events.And jelly is a much bigger thing than some packet from the supermarket mixed with boiling water. In the first place, it was not factory-made gelatine that did the setting, but any number of ingenious adaptations of kitchen materials and ingredients. In the second, it was not just a simple clear, coloured solid, but an optical prism to show off and transform the foods contained within it. It was the cook’s greatest resource for introducing colour, variety and delight into the table display.The book sketches in the history of jellies, particularly in England, and discusses their place within a meal; gives several recipes based on the various setting agents (carrageen, gelatine, isinglass) and also for cereal moulds (flummery, tapioca, semolina, rice, cornflour, etc.); describes how jellies may be assembled by layering, embedding, lining and inclusion of fruit, nuts, gold, etc.; and gives an excellent illustrated account of the various forms of jelly moulds.

Peter Brears is one of Britain’s foremost reconstructionist cooks and an adviser on historical food and its presentation. He was formerly Director of Leeds City Museums, having before that been in charge of the York Museum. His Cooking and Dining in Medieval England (Prospect) won the André Simon Award for Food Book of the Year for 2009.

A PDF of the introductory matter, the bibliography and index and selected pages from the text of Jellies & their Moulds.

Review by Julie Wakefield from her website Austenonly (13 Dec 2010)

The festive season is nearly upon us, and so I am prompted to write about festive things in the main for the next couple of weeks before the big day itself…and things don’t get much more festive than jellies, those stalwarts of many a children’s party.  Even wunderkind chef, Heston Blumenthal used one in his Victorian Feast last year- this is a slightly -ahem-”adult” video, so do be warned…And as I haven’t written a book review or about food in the past few weeks I thought I would combine the two now in a review of a newly published book, Jellies and their Moulds by the renowned food historian, Peter Brears.

References to jellies in Jane Austen’s works are few. They were obviously served at Fanny’ Price’s Ball at Mansfield Park, for Mrs Norris ‘spunges’ the leftovers the day after the ball, supposedly to feed an ailing housemaid (a likely story):

It was a heavy, melancholy day. Soon after the second breakfast, Edmund bade them good–bye for a week, and mounted his horse for Peterborough, and then all were gone. Nothing remained of last night but remembrances, which she had nobody to share in. She talked to her aunt Bertram – she must talk to somebody of the ball; but her aunt had seen so little of what had passed, and had so little curiosity, that it was heavy work. Lady Bertram was not certain of anybody’s dress or anybody’s place at supper but her own. “She could not recollect what it was that she had heard about one of the Miss Maddoxes, or what it was that Lady Prescott had noticed in Fanny: she was not sure whether Colonel Harrison had been talking of Mr. Crawford or of William when he said he was the finest young man in the room – somebody had whispered something to her; she had forgot to ask Sir Thomas what it could be.” And these were her longest speeches and clearest communications: the rest was only a languid “Yes, yes; very well; did you? did he? I did not see that; I should not know one from the other.” This was very bad. It was only better than Mrs. Norris’s sharp answers would have been; but she being gone home with all the supernumerary jellies to nurse a sick maid, there was peace and good–humour in their little party, though it could not boast much beside. (Chapter 29)

And recently when I was visiting the Jane Austen House Museum I was pleased to find this collection of early 19th century porcelain jelly moulds in the newly restored kitchen:

We are justified in writing about them, therefore. The author heaves a sigh of relief.

Having made 18th century jellies on Ivan Day’s Regency Food Course, I can confirm that in the Long Eighteenth century they were then a far more sophisticated and exciting food, and were used in many different ways, much more exciting  than the pedestrian way we use jellies now, and this is a point that becomes immediately clear on reading the introduction to this book:

Jellies are unique in their range of physical properties. Although they are virtually tasteless, they can instantly absorb any chosen flavour drawn from fruits and spices, as well as readily dissolving sugars, wines and spirits throughout their mass. Having no texture of their own, they can take on those of creams, cereals, fruit purees, ground nuts and many other things or they can be whipped into foams. They can also be used to embed fresh, preserved or candied fruits or still custards and other jellies of contrasting flavour and colour. Being colourless at the outset they immediately take on the widest variety of tones, tinctures and degrees of opacity as imparted by all manner of edible liquids and colourings. They have no shape of their own but take on the shape of any mould or vessel into which they are poured. This list of attributes is already impressive but has yet to include their most important and unique characteristics. The first of these is perfect transparency, the second is dynamic movement, the wobble factor always a delight to the eye. The third …is their capacity to slowly release their flavours and textures into the mouth, prolonging the pleasure and appreciation of ingredients which otherwise would be more rapidly swallowed.

This book, which covers the history of jellies from medieval era to the 20th century is part of Prospect Books’ superb English Kitchen series of books. Go here to see a wonderful 12 Days of Christmas Page of some of the books in the series, which are on offer . These are all reasonably priced, scholarly, interesting and readable books and Peter Brears’ book on jellies, the latest in the series, is no exception.

I had the extreme pleasure of hearing Mr Brears’ talk on the subject of the Georgian Kitchen and the Domestic Offices in a grand Georgian House at the Costume Society’s symposium on Life in a Georgian Town which was held in  Bath in 2005. He is a superb communicator, and has a wonderful grasp of all the intricate detail of his subject. If you ever get the chance to hear him talk, my advice is to go. Just go.

The book is not solely concerned with our era, but the chapter on Georgian Jellies is 34 pages long and gives in great detail a plethora of recipes from the era for such wonderful and now sadly forgotten confections such as playing card jellies, a nest of eggs jelly, moon and stars in jelly and Oranges en Rubansor Jellies a la Bellevue. These are, in fact, small clementines or tangerine skins filled alternately with red wine jelly and white flummery.

Peter Brears is also a very accomplished artist, and throughout the book has illustrated jellies and moulds in exquisite detail in black and white pen and ink drawings. In the Georgian Jellies chapter he gives detail information on wooden, tin and porcelain jelly moulds which were all in use throughout the era. 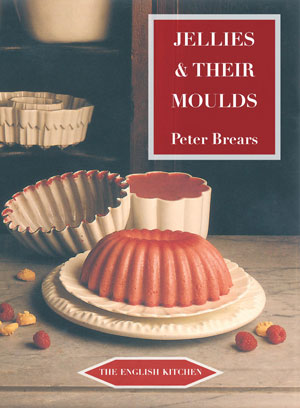 You're viewing: Jellies and Their Moulds £10.00
Add to basket