Geoponika is one of the most celebrated texts to come out of the Byzantine renaissance promoted by the 10th-century emperor Constantine VII Porphyrogenitus. It was a gathering together of many classical and post-classical agricultural works, from Pliny in ancient Rome to the 7th-century Cassianus Bassus and the 4th-century Vindonius Anatolius. Many of these no longer survive, making the Geoponika the more valuable. It is a source both for ancient Roman agricultural practice in the West, and for understanding Near Eastern agriculture and what went on in Byzantine Anatolia. It was once translated into English, in the early 19th century, but has usually only been accessible to scholars of Greek. The history of the manuscript is extremely complicated. Andrew Dalby provides a modern and intelligent translation. He does not explore in any detail textual matters, wishing to concentrate on questions of agriculture and food production (meanwhile a definitive Greek text is in preparation elsewhere). This will be an essential tool for students of the classical and medieval worlds.   Andrew Dalby is a classical and food historian whose translations of Cato and of Byzantine dietary texts (Prospect) have been welcomed, and whose dictionary of classical food (Routledge) and history of spices (California and British Museum) have been universally praised. A PDF of the list of books and chapters in Geoponika, as well as a list of the sources used by the compilers, taken from the page-setting of the forthcoming book 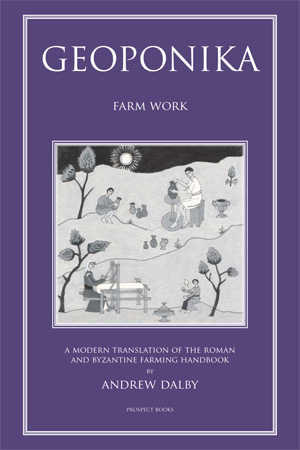