Food and the Rites of Passage

Food and the Rites of Passage

BAPTISM, MARRIAGE, CHILDBIRTH, DEATH: these are the milestones of life, invariably marked by a feast or comforting rituals founded on food and drink. Some of these habits flourished, then died away – think of the cups of wine passed around the gossips gathered at a lying in; others have gone on to be industries in their own right – the wedding cake, which has slowly but surely evolved from the giant flat discs of bride cake illustrated in the sensational full-colour cover of a fête in Bermondsey by Hofnagel in the seventeenth century, to the many-tiered and icing-bedaubed monuments of today.

The book consists of six essays by recognised food-historians, each taking in turn one of these milestones, sometimes (but not always) with a certain north-country bias: Peter Brears writes on funerals; Dr Layinka Swinburne writes on childbirth; Laura Mason on wedding cakes; Ivan Day on old marriage customs; and Professor Tony Green on the sociology of the modern wedding celebration. There is also an overview of Irish food customs, with reference to these rites, by the well-regarded young Irish food historian, Regina Sexton.

This book is the eleventh volume in the series ‘Food and Society’ produced by the Leeds Symposium on Food History. Prospect produced last year’s proceedings, Feeding a City: York; this book is uniform with that. There are plentiful black and white illustrations throughout; the book is fully indexed and annotated.

The editor, Laura Mason, was an historian of British Food whose previous books include Traditional Foods of Britain: an Inventory and Sugar-plums and Sherbet: the Pre-history of Sweets. She was a regular contributor to the Leeds Symposium on Food History. She died in 2021.

Around 1569, the miniaturist Joris Hoefnagel, a Flemish refugee living on the south bank of the Thames, painted a wonderful picture of a wedding in the nearby village of Bermondsey. Each tiny, intricate detail gives us a clue to the elaborate rituals which a sixteenth-century marriage celebration could incorporate. A bridal procession emerges from the church of St Mary Magdalene; two young men and two young women lead the way, carrying enormous bride-cakes; they are followed by two fiddlers and a bride leader, or cupbearer, who carries a large bunch of rosemary in a golden ewer, its branches tied with tiny red and white “bride knots” and two streaming ribbons – “bride laces”; gilded flags among them are painted with minuscule armorial designs, the ribbons are perhaps inscribed with mottoes. The processing figures each carry a pair of the scented white gloves which it was customary to present to wedding guests. In an open kitchen, a feast is being prepared: haunches of meat turning on a long spit and cooks pulling from the oven enormous pies – probably filled with venison.

Modern church weddings are still imbued with old customs. They are perhaps the only surviving area of modern life where people still have an almost superstitious regard for traditions. Yet many of these rituals have been entirely forgotten. What has happened to rosemary, for example? Once one of the chief components of the wedding, symbolic of both potency and remembrance and thought to be a vital cordial for the heart, its sprigs were sprinkled ceremoniously with rosewater. But other traditions have evolved: the Italian sugared nuts known as “confetti” are now pieces of coloured paper scattered over bride and groom as they leave the church (even earlier they scattered ears of wheat – symbols of fertility); the spiced wine or “Hippocras” which was once the special feasting drink is now sparkling wine or champagne. Then there is the wedding cake: the vast, lozenge-shaped pastry cases (the Countess of Rutland’s receipt for making Banbury cake produces a 30-pound monster 18 inches in diameter) carried before the bride in Hoefnagel’s painting bear little resemblance to the three-tier confection, swathed in marzipan, which is traditional today. But nonetheless they share features: the rich plumcake mixture inside the pastry cases is really just like the spiced fruitcake of today. Paste of almonds, or marchpane (also known as “matrimony”), was once one of the most expensive foods you could buy and therefore associated with the grandest occasions. In some areas of Europe it was the custom to break the cake over the bride’s head – John Aubrey linked it with a Roman practice – even in the nineteenth century a local historian from Yorkshire describes “a thin currant cake, marked in squares, though not entirely cut through” broken over a local bride. This book examines with riveting detail the food associated with all the important passages of life – not just marriage but also childbirth, baptism and death. In the sixteenth century pregnant women were advised to eat cock sparrows and leek juice for a smooth confinement. In the north of England it was customary to give a woman in labour a “groaning cake”, which would be cut into the exact number of slices of those present to avoid bad luck. It was common to eat chocolate at funerals and Parson Woodforde, invaluable chronicler of all things edible, wrote that in 1782, at the funeral of “Mrs Howe”, the guests had “Cake and Wine and Chocolate and dried Toast”. No expense was spared in a sending off: in 1760, mourners at Farmer Keld of Whitby’s funeral put away nine large hams, eight legs of veal, 20 stone of beef, 16 stone of mutton, 15 stone of Cheshire cheese, 110 penny loaves and 30 ankers of ale. But provision was made too for the poor: in Sheffield, being buried “Hallam Fashion” meant that the guests brought their own bread and cheese to save the family expense.

The essays in this book are entirely enthralling, bringing the past alive. Reading it, one also experiences the pleasure of recognising in a custom still observed today the faint flicker of an earlier one which has evolved, changed and been re-invented over the centuries. As always with Prospect Books,Food and the Rites of Passage looks beautiful – and because food should never be only for reading about, there are recipes at the end for plum cakes, christening cakes, “funeral bunnes”, “kissing confits” and a “Paste of Violetts, Cowslipps, Borage, Buglosse and Rosemary flowers”.

As focal points of individual and group transformation, rites of passage provide a unique opportunity to examine the use, meaning, and material importance of food. The deployment of food within such events and the habits of its incorporation convey vital features of individual performance, group understanding, and cultural cohesion, but also speak broadly to questions of constancy, change, and the forces impelling them within a larger social frame. Such is the potential substance of a volume like Food and the Rites of Passage, a possibility only partially tapped by the book’s contributors.

Food and the Rites of Passage is the latest offering derived from the annual Leeds Symposium on Food History. The five essays concentrate on three transformational rituals in the British Isles – baptisms, weddings, and funerals – primarily within the confines of the Anglican Church. Essays span the early-modern period through the first half of the twentieth century, largely through a descriptive discussion of prepared foods, beverages, and ingredients. We learn much of interest. Ivan Day, for instance, shows that bride cakes emerged as an important element within weddings; that they were often broken over the bride’s head, generally upon arrival at her new residence; and that her attendants scurried for the pieces that fell to the floor as an omen of their own future marital success. Layinka Swinburne and Laura Mason acquaint us with ingredients thought to have been useful in conceiving and bearing children, from leek juice, quails, and animal testicles, to dates, almonds, and figs, to rabbit milk with pulverized snake skin and crayfish. From Swinburne and Mason we also learn that in the sixteenth and seventeenth centuries, “gossips” – female friends and relatives of a pregnant woman – assembled prior to childbirth to assist and witness the birth, prevent baby substitution, and sponsor baptism. At such lying-in, known as the groaning-time, the presentation of a groaning-cake by family friends arose as an important symbol, imbued with notions of luck and fertility. In Peter Brears’s essay we read that funerals were the critical rite through which food functioned as a measure of social prestige among all social classes. The alimentary importance of funerals was much more heightened than that of christenings, coming-of-age ceremonies, and weddings, and often lent itself to highly jovial affairs of binging, drinking, and other entertainment. This may have derived from a view that the deceased had passed into a better afterlife while those remaining still had much difficulty facing them, a sentiment attested to by commercially produced funeral biscuits, the printed wrappers of which display such notions from the seventeenth century forward. Whatever the impetus, providing a significant feast before, during, and after the funeral created a serious drain on the household resources of people of various social strata. As Brears notes, “in many households the funeral feast was the most expensive meal ever prepared”.

What we gain in such descriptive richness, however, we lose in analytical prowess. Throughout most essays there is a troublesome lack of any extended discussion of several issues, of which the two most obvious are colonialism and gender. The influence that British colonialism cast upon food habits in the United Kingdom – how it remapped literally and figuratively the foods that were available, their affordability, and their expanded use among increasingly wider audiences at all levels of society – is all but ignored in the book. Thus, we can appreciate the careful attention various authors give to changing recipes that show progressively greater inclusion of sugar, dates, figs, nutmeg, tea, and other commodities during the period under discussion. Yet we must puzzle over the absence of deliberation on the massive colonial confluence of political and economic forces that brought these commodities into wider circulation and enabled their use in the recipes considered. So, too, we must be perplexed about the play of gender in the food habits detailed in each essay. In a volume dedicated to food and to at least two rites of passage (birth/baptism and weddings) in which gender figures heavily, it is surprising to find little sustained examination, or often even mention, of issues of gender: the engendering of different foods; the gendered control of food and the effects this had on family relationships and rituals; the gendered power manifest in, or gendered symbolism woven around, certain foods and their handling.

An exception is Regina Sexton’s research on food habits in weddings and wakes among lower-class rural Irish during the nineteenth and twentieth centuries. Sexton does discuss the impact of industrialization and intercontinental transportation upon Irish consumption patterns within these two rites of passage. She also devotes some attention to how gender figured into the politics and meaning of food within and between households and the larger community. Yet Sexton, too, seems reluctant to foreground British colonialism and the overseas plantation systems and other political-economic realities that helped to fuel industrialization and the expanding transport links she mentions.

In fairness, the introduction to the volume acknowledges a lack of sociological and anthropological analysis in the essays. In a slim volume, we can appreciate the production constraints that may have factored in. Nonetheless, the dearth of analytical scrutiny renders the volume much less useful to food studies than it might otherwise be, inhibiting its capacity to advance our understanding of the prime importance of food in rites of passage. 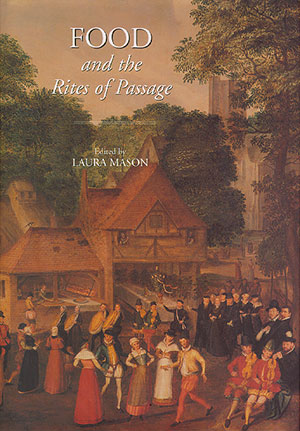 You're viewing: Food and the Rites of Passage £15.00
Add to basket