Food and Drink in Archaeology 1

Food and Drink in Archaeology

Food and Drink in Archaeology 1

Report from the University of Nottingham website describing the first Conference

Everything you have ever wanted to know about the archaeological history of food and drink will be showcased at The University of Nottingham, UK, this month. From prehistory to the Victorian age, a postgraduate conference, the very first of its kind, aims to highlight current and on-going research into the archaeology of food and drink.

Although the eating and drinking habits of the ancient world may appear at first to have been very different to ours this conference will illustrate the many similarities – particularly in our cultural behaviour, agriculture, trade patterns, architecture and domestic contexts.

Researchers at the University say there is a lot that the study of food and drink in archaeology can tell us and it isn’t just about what they ate in the ancient world. It is about how they ate, what they hunted and the production of food. It can also be used to date archaeological sites by carbon remains, pottery fragments and associated architecture. It indicates social behaviours such as feasting and religious acts such as sacrifice, and provides important evidence for how the consumption of food was an integral part of cultural and individual identity.

Sera Baker, a PhD student in Archaeology, is one of the organisers of the Food and Drink in Archaeology 2007 Conference. She says “Whilst the importance of nutrition for survival has long been recognised, increasing emphasis is being put on the cultural significance of the production, distribution and consumption of foodstuffs throughout all archaeological periods.”

The ancient Near East, the Mediterranean, Europe and the British Isles will all come under the postgraduates’ microscope even the household diet of the Willoughby family, former residents of Wollaton Hall in Nottingham will be scrutinised.

More than 20 postgraduate researchers will speak on topics including hunting in Roman Britain, how food reached the Roman frontier, what was sold in the grocery shops of Roman Pompeii and Ostia, the use of stimulants in ancient societies, feasting in Mycenae and the Aegean, food storage and production in Nordic Greenland and 17th century Iceland, and what they ate in early medieval Ireland and late medieval London.

There will be a chance to dip into the remains of late Bronze Age domestic tips, learn about exotic Roman food, Dutch prehistoric agriculture and the Viking diet. Delegates will also find out what fossilised and skeletal remains in the Middle East reveal about social and cultural behaviour of the time.

The keynote speaker at the conference will be Professor Martin Jones of The Department of Archaeology at The University of Cambridge. His latest book Feast: Why Humans Share Food has just been published. In it he uses the latest archaeological methods to show how the human meal has developed since the earliest evidence of human consumption, around half a million years ago, to the era of the TV dinner and the drive-through diner. He says “We have now passed a watershed in analytical potential, in which we can study foods in radically transformed states, and directly connect them to the evidence of human bodies, dining spaces and artefacts. While our initial breakthroughs in this field concerned procurement and production, attention can now move to the intriguing patterns of consumption.

The conference Food & Drink in Archaeology 2007 will be held at The Department of Archaeology on May 18–19.

This attractive collection of papers is from a Conference which took as its theme the social implications of food and drink and world history and pre-history its scope. Nottingham University encouraged contributions based on sources of every kind: material culture, historical documents, zoo-archaeology, archaeo-botany, and isotopic analysis of human bone. The conference attracted scholars and budding scholars from all over Europe.

Six of the papers have especial interest for medieval archaeologists and historians. Livarda looked at the spread of Mediterranean crops in northern Europe, surveying the archaeo-botanical evidence for olives, cherries and mulberries from Roman times onwards. All three are found on Roman sites, either imported or cultivated locally, but from the early medieval period onwards olives and mulberries are rare; cherries, in contrast, continued to be eaten: their cultivation was taken up in the early Middle Ages in both villages and towns. Both documentary and archaeological sources for feasting in Ireland and Wales in the 1st millennium ad were examined by Sassin. Physical evidence for the feasting halls described in the epics in Ireland is elusive, but some sites have remains of elite glass drinking vessels; and although in Ireland cattle was the feasting animal, currently there is just one site in Wales, Dinas Powys, which has feasting evidence, in the form of vast quantities of pig bones.

Poole seeks to ‘highlight the potential of zoo-archaeological evidence to inform about social structures and ideologies in the Viking age’ by examining the impact of the Vikings on the food and agricultural economy in England. He compared towns in the Danelaw with some in SW England. Fewer differences emerged in the raising of cattle, sheep and pigs, though more dairy food and more horsemeat may have been eaten in the Danelaw (the latter something avoided in societies influenced by Mediterranean and Christian traditions). Pierce re-examines the perennially fascinating question of why the Viking settlements in Greenland failed just after ad 1400. Basing her conclusions on documentary and archaeological sources, Pierce argues for the environmental degradation of the previous century combined with the determination of the settlers to maintain their European diet as leading to their extinction. While the Icelanders turned to fishing to make up for the short growing season and survived, the Greenlanders persisted in avoiding fish; for them, cattle, however costly to raise, represented both wealth and their Christian identity, but they and their cattle starved.

Stable isotope analysis of human bones is a fairly new science and still only a few medieval cemeteries have been sampled, but it holds out the promise of identifying groups or individuals who eat meat and fish in different quantities. Lakin analyses remains of burials at St Mary Spital in London dating from the Conquest to 1540 to see if the London diet was distinctive: preliminary results put Londoners’ diet close to that of people buried within other late-medieval religious houses elsewhere.

The changing tastes of the 16th century are revealed in Dawson’s study, which examines the household accounts of a Midland family. Beer replaced ale, veal was purchased only from the mid-16th century onwards, and the eating of pork declined from then on – all perhaps reflecting the increasing urbanisation of the late Middle Ages.

Though many of the results and conclusions are clearly works in progress, there are insights among the different authors which bode well for future work. Food & Drink in Archaeology is now a respected series, with two more volumes on their way. Later meetings widened their scope to include established scholars as well as the rapidly maturing postgraduates of the first volume. Good things are promised. 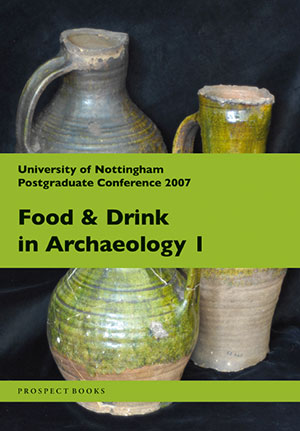 You're viewing: Food and Drink in Archaeology 1 £22.50
Add to basket