A PDF of sample pages.

Review from Comitatus 44, published by the UCLA Center for Medieval and Renaissance Studies (09/13)

Review from Comitatus 44, published by the UCLA Center for Medieval and Renaissance Studies (Sep 2013)

The food of the Middle Ages has gradually captured the imagination of medievalists over the past generation. One of the first scholars to seriously study and edit medieval European recipes, Constance Hieatt published her final cookery edition before her death in December 2011. Hieatt was also a scholar of medieval English literature, but actively published a variety of culinary articles and manuscript editions, recipe compendiums, and adaptations of medieval recipes for modern cooks beginning in the 1980s. Hieatt edited most of the larger medieval English recipe collections over the course of her career; this has greatly benefitted a new generation of scholars who can access a large proportion of extant culinary texts with the assistance of Hieatt’s editions. While smaller in scope than many of her projects, Cocatrice and Lampray Hay: Late Fifteenth-Century Recipes from Corpus Christi College Oxford is a valuable edition of a lesser-known manuscript.

This edition and translation is based on a group of culinary recipes in a fifteenth-century manuscript written in Middle English, Corpus Christi College Oxford MS F 291. Hieatt collaborated with Sharon Butler, also now deceased, on the project of transcribing and editing the manuscript. Hieatt and Butler worked together on other medieval cookery editions and modern recipe adaptations, including Curye on Inglysch: English Culinary Manuscripts of the Fourteenth Century in 1985 and Pleyn Delit: Medieval Cookery for Modern Cooks, co-authored with Brenda Hosington in 1996. Hieatt and Butler initially encountered MS F 291 around 1980, but set the manuscript aside due to its difficult nature. The vocabulary, unusual instructions, and even some culinary preparations proved too challenging until Hieatt returned to the manuscript after decades of experience (22).

Cocatrice and Lampray Hay contains three main sections: an introduction; the text, translation, and commentary; and a supplement to Hieatt’s 2006 Concordance of English Recipes: Thirteenth through Fifteenth Centuries, co-authored with J. Terry Nutter and Johnna Holloway. The heart of Cocatrice and Lampray Hay, the cookery text, now consists of 99 recipes. The collection likely originally contained 101 recipes; Hieatt calculated this total by corroborating the actual recipes’ titles found on fols. 3r–68r with the table of contents on fols. 1v–2v and factoring in the number of recipes which could fit on one missing leaf. Cocatrice and Lampray Hay includes not only familiar medieval dishes, such as blancmange (63 and 122), Lenten eggs (84), and mawmene (121), but also more distinctive creations like “Cocatryce” (27) and “Lampron hay” (57). Following each recipe transcription, Hieatt provides a modern English translation and a commentary. The commentary is particularly valuable, containing literary and historical notes, as well as occasional suggestions for readers interested in preparing the recipes. Hieatt’s experience with hundreds of early cookeries over decades of research is most apparent in the commentary, as she draws connections to cooking practices, vocabulary, and recipe exemplars from a variety of medieval sources. For example, she contrasts a recipe for stuffed fish, “Macrel Farsed,” to the only other stuffed fish dishes she is aware of in Bodliean MS Ashmole 1393 (34). Hieatt also describes a cooking vessel specified in a capon dish, a ‘urinal,’ as the same type of glass vessel used by medieval physicians to examine urine (131).

As an edition rather than a monograph, Cocatrice and Lampray Hay does not contain a grand historical or literary argument. However, Hieatt repeatedly stresses the uniqueness of this text, and indeed, the recipes are exceptional. It is this characteristic which will appeal to a variety of scholars within medieval studies. Although many recipes in this collection are familiar to readers interested in medieval food, the collection has no relationship to any other known manuscript cookeries and was composed independently of extant culinary texts. The recipes are longer and more detailed than most extant medieval recipes, even containing specifications of ingredient quantities. Linguists will no doubt be attracted to the recipe vocabulary, as the manuscript contains words that are not included in any dictionary, including the Oxford English Dictionary and Middle English Dictionary. Examples of these rare words include the frequent “bypece,” which Hieatt assumes is a secondary cut of meat, and the un-deciphered “Clonnennone” (119). Scholars of medieval literature and authorship will find the strong, yet often forgetful, authorial voice distinct and intriguing. The original author seems absentminded yet determined to record these recipes; as a result, the text is much more colorful than the typical medieval recipe. Although the recipe collection includes preparations for typical noble feast fare, such as veal, capon, swan, and porpoise, other dishes prove most unusual. The mythical cockatrice, or basilisk, appears as a dish constructed from parts of a pig and cock. If this category of recipes does not appeal to scholars of animals or folklore, I don’t know what will!

Cocatrice and Lampray Hay proves to be another excellent medieval cookery edition by Hieatt. The role of Prospect Books in creating such a volume should not be neglected: the publisher has gradually earned a strong reputation among food and culinary historians for their dedication to publishing high quality monographs and editions on a variety of historical food topics. Medievalists who require a convenient resource for substantive or summative information on historical culinary topics should embrace these volumes. Like other editions in the Prospect Books catalogue, the transcription, commentary, and notes in Cocatrice and Lampray Hay are useful and easy to reference. The weaknesses of the book, then, are minor. First, Hieatt excludes substantial discussion of the physical qualities of the manuscript, only briefly mentioning the quality of the ink and pages in one sentence. Second, the edition does not contain any images of the manuscript. Especially after reading the introduction, which touted the rarity of the manuscript, I eagerly awaited a visual example or, minimally, more attention to detailed descriptions of condition, marginalia, and presentation.

Cocatrice and Lampray Hay is a fine edition for a medieval scholar’s library. Because the ordinary and extraordinary merge in this recipe collection, it is both an ideal introduction to medieval culinary customs and a fresh text for the seasoned food scholar. Although Hieatt may remain better known for her other critical editions and the volume of culinary scholarship she produced, Cocatrice and Lampray Hay highlights Hieatt’s finest contribution: drawing attention to forgotten manuscripts. 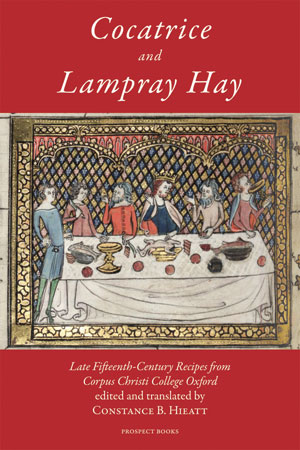