Review by John Wilkins in The Agricultural History Review (1999)

This is a splendid edition of an agricultural text by the earliest surviving Roman prose author. Andrew Dalby, the editor, has published widely on ancient texts concerned with food and eating and brings a fresh eye to this valuable work: not every book on Cato has a contents page with ‘a note on money’ and ‘a note on sex’, the two aspects of culture which, if not held in check, Cato considered among the most threatening to his own ideology. Dalby writes elegantly and with exemplary clarity in his introduction, translation and explanatory footnotes. The Latin text used is the Bude edition of 1975, with small changes. The introduction covers the development of Italy in the third and second centuries BC, in particular the relationship between Rome and the Italic and Greek communities of the southern part of the peninsula. Cato (who was born in Latium or Lazio) became the severe Roman Censor of Republican political mythology and wrote damningly of Hellenic influence. Yet there are traces of Greek influence in De agricultura, including adaptations of medical treatises which ignore such vital considerations as season and individual constitution and may have been a hazard to health. Dalby notes a conflict in the work between ‘the farm as a way of life and the farm as a mere investment’. Attention is given to the religious year and to magical practices but the main thrust of the work is advice on agricultural investment to a speculator. Dalby is at pains to point out (p. 23) that the focus is on cost and savings rather than maximizing income. But this is no subsistence farm. Olives, wine, vegetables, lambs and pigs and perhaps even cakes are produced for sale and attention is given to contractual detail. The imagined farm appears to be located in the inland region of Campania or Latium close to the town of Venafrum which was an olive-growing region. It would have been helpful had Dalby given some idea of the typical farm of 60 acres in the area at this period (early-second century BC) or later. He comments on the problem of Cato’s order of priorities, which was discussed in antiquity: ‘first the vineyard (or an abundance of wine), second an irrigated kitchen garden, third a willow wood, fourth an olive field, fifth a meadow, sixth a grain-field, seventh a plantation of trees, eighth an orchard, ninth an acorn wood’. According to Dalby these are ‘added-value features whose presence – independently of whatever is the main produce – helps to promote self-sufficiency, to reduce marginal expenditure and to provide added sources of profit’. But we still need to know why Cato puts cereals sixth: why is the ‘main produce’ not the main concern? Later authors identified viticulture in particular as dangerous and speculative farming (see N. Purcell, Journal of Roman Studies 1986). Dalby’s notes are particularly helpful in directing readers to other agricultural authors such as Varro and Columella, and to the secondary works of Joan Frayn on subsistence farming and the late K.D. White who wrote extensively on practical aspects of Roman farming. Readers of this journal know better than I the influence of Cato on agricultural authors after the classical period, whether in the UK or in Mediterranean countries. Dalby does not address the matter of reception. The text has many fascinating features ranging from the construction of presses and a lime kiln, to grafting, pitching containers, force-feeding geese and cutting wood when the moon is not full. Veterinary details are remarkable, as is the section on cakes and the manufacture of Greek-style wine. These appear to be luxury items against which we might have expected a diatribe from the Censor. Similarly, the presence of a fishpond is notable, given its censure in later Roman authors. The only named fish to appear are in a rambling recipe for a laxative. Dalby draws the line at section 157 with its ‘cabbage eater’s urine’ and its use of cabbage to cure breast cancer: this is the work of an inferior author. For the modern reader, this treatise is a source of endless fascination, in its details of husbandry, in its moral and ideological setting, in its prose form (in a culture where poets were quite happy to describe the construction of a plough), in its treatment of topics of scientific and medical interest and much more. The reader can also speculate on the apparent contradictions of its totemic author. Andrew Dalby is to be warmly praised for bringing the work to the modern reader in an edition that is helpful and attractive, with maps and diagrams to illustrate the area under review and ancient constructions of buildings, presses and kilns. 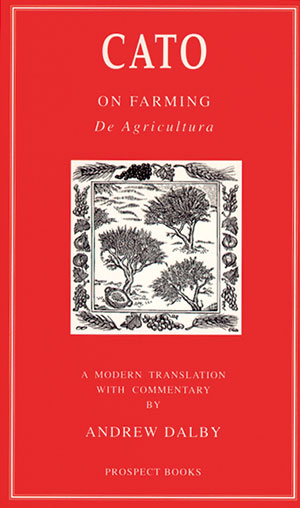