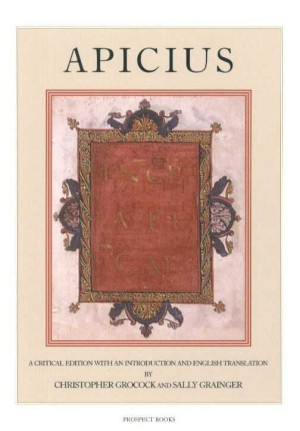 A critical edition with an introduction and English translation

Apicius is the sole remaining cookery book from the days of the Roman Empire. Though there were many ancient Greek and Latin works concerning food, this collection of recipes is unique. The editors suggest that it is a survival from many such collections maintained by working cooks and that the attribution to Apicius the man (a real-life Roman noble of the 2nd century AD), is a mere literary convention.There have been many English translations of this work (and, abroad, some important academic editions) but none reliable since 1958 (Flower and Rosenbaum). In any case, this edition and translation has revisited all surviving manuscripts in Europe and the USA and proposes many new readings and interpretations. The great quality of this editorial team is while the Latin scholarship is supplied by Chris Grocock, Sally Grainger contributes a lifetime’s experience in the practical cookery of adaptations of the recipes in this text. This supplies a wholly new angle from which to verify the textual and editorial suggestions.This volume supplies a fully referenced parallel text (Latin and English) of Apicius and of the excerpts from Apicius done by Vinidarius. There is an extensive introduction discussing both the art of cookery in the later Empire and the origins of this text, together with a new hypothesis as to its true date. There are then long appendixes discussing the vexed question of the true nature of the Roman store-sauces, garum and liquamem. There is also a full bibliography and extensive discussion of the meaning of technical terms found in the text. This book will set a new standard for Apician studies. Christopher Grocock is a teacher of Latin; he was Project Direct at Bede’s World Museum in Jarrow; he has edited for the OUP Historia Vie Hierosolimitane of Gilo of Paris as well as work by the Venerable Bede (forthcoming); he has contributed many papers to learned journals and conferences on medieval Latin studies. Sally Grainger is the author of The Classical Cookbook (with Andrew Dalby) for the British Museum. She is a leading reconstructionist cook and has produced classical and medieval meals for countless conferences and public gatherings. A PDF of the preliminaries, the first pages of the introduction and some sample pages of the Latin and Eglish texts of Apicius Review of Apicius in Gastronomica, by Alexandra Grigorieva Review of Apicius from the Journal of Classics Teaching

Review of Apicius in Gastronomica, by Alexandra Grigorieva

Until this new edition appeared, the critical edition and translation of Apicius most worthy of notice was Jacques André’s, published in France in 1965, when food studies was still in its salad days. This new English translation was thus a much-anticipated event, especially since the team work­ing on it combined an expertise in Latin scholarship with a vivid interest in food history and ample culinary experience. Sally Grainger, having been a professional chef and a student of classics, is now one of the leading reconstruc­tionist cooks in the United Kingdom (together with Andrew Dalby she wrote the Classical Cookbook [British Museum Press, 1996]; and her Cooking Apicius, practical adaptations of Apicius recipes for modern cooks, was published by Prospect Books simultaneously with the volume under review). Christopher Grocock specializes in medieval Latin; his edition of the Venerable Bede is forthcoming from Oxford University Press. In this way both the linguistic and culinary aspects of late Latin recipes have been covered as thoroughly as possible. The resulting bilingual volume is beautiful but bulky. Only half of it is actually taken up by late Roman recipes from two diverse manuscript traditions: some 450 recipes from ten books ascribed to Apicius, and thirty-one recipes extracted by a certain Vinidarius from roughly the same collection of books. The rest of the Grocock and Grainger’s volume tackles various Apicius-related problems: peculiarities of the only extant independent collection of Latin culinary recipes; the personality of the historic glutton Apicius, whose name became synonymous with luxury cuisine; cooks and cookery books in antiquity; and so on. It’s a fascinating read. Regrettably, the most interesting chapter, “Cooking Techniques in the Ancient World”, is all too brief. As a reconstructionist and a scholar-cum-chef, Grainger has had extensive experience cooking with replicas of Roman pottery and other utensils, so it is disappointing that only a few basic techniques (such as the use of wood or charcoal, P.77) are fully discussed. The same goes for “Vocabulary of Cooking Techniques,” Chapter 1 of the Language of Apicius, and the “Glossary”. Although commentary on the recipes is dispersed through­out the book, there is a certain lack of cohesion, which is, perhaps, inevitable when dealing with such a patchwork text as this miscellaneous, diachronic recipe collection. Many of the new edition’s best finds stem from abundant practice combined with the strenuous perusal of Latin and Greek sources. Thus, Grainger and Grocock argue very convincingly in favor of the diversity of garum and liquamen, the fermented-fish sauces of Roman times. The intrepid Grainger painstakingly re-created such sauces from scratch in her potting shed and noted the differences. Grainger and Grocock have also proposed a new way of looking at tracta, previously considered a kind of rudimen­tary pasta, as their practical experiments convinced them that it is really a thickening agent for sauces. On the other hand, the importance of practice can sometimes be overestimated. For example, recipe 3.5, for condiments and spices made from a certain fruit called citrium (considered to be a citron, Citrus medica, the earliest known and most thick-skinned citrus fruit in the Mediterranean), is translated as a recipe for citron melon with a reference to the “Glossary” for explanation. There, the only reason given for this change of fruit is that the recipe for minutal ragout with citrium, cannot be prepared with citron in the way specified (that is, by washing it inside and out, which in fact is normal for cit­ron, as its pulp is usually discarded, while the thick peel has both culinary and medicinal uses). As it happens, citron can be used, and with splendid results, so this decision seems rather arbitrary. Moreover, on page 197 the recipe is trans­lated as a sweet minutal of gourds with no reference given to the original citrium, citron melon, or the “Glossary,” leaving a nonspecialist reader rather confused. Such lack of accuracy, though only occasional, is frustrating. Nevertheless, Apicius is a scrupulous manuscript edition, an up-to-date practical English translation, and a treasure trove of practical knowledge of Roman cookery that was gained by many years of valiant hands-on experience. I warmly recommend it to all readers with an interest in food history, both theoretical and practical. Some of the recipes in Apicius can, in fact, tempt even the most jaded palate: just give dates stuffed with black pepper and fried in honey a try!

Review of Apicius from the Journal of Classics Teaching

Apicius is like a dry martini. Additions – like generous helpings of vermouth – try to make the recipes usable. But as Luis Bunuel playfully put it, ‘connoisseurs who like their martinis very dry suggest simply allowing a ray of sunlight to shine through a bottle of Noilly Prat before it hits the bottle of gin.’ This is a connoisseur’s edition, illuminated, not adulterated. The Latin text is accompanied by a full apparatus, the introduction lays out editorial principles, describes the two extant 9th C MSS (the lovely Vatican MS [V] is illustrated on dustcover and frontispiece) and includes a stemma. The text is conservative in its rejection of emending spelling, since the original haphazard process of compilation seems to have garnered a linguistic pot-pourri. But the edition will principally be of interest to those who want to experience ‘the reality of being there’. The English translation is clear and close without being slavishly tied to Latin idiom. Indeed it often reads like a modern cookery book (where it isn’t simply a list of ingredients): ‘ceramic dish’ for ‘earthenware pot’ is a simple example. G.-G. do not hesitate to ‘improve’ the text if grounds are sufficient. minutal dulce ex cytriis has to be sweet, so they throw in some honey and Iiquamen since Apicius offers ‘flavour with vinegar’ (aceto temperabis). They eschew modem equivalents which might mislead, hence minutal is left in Latin (minutalia: ‘dishes cooked with a thick sauce’), avoiding ragout (Edwards) or fricassee (Flower & Rosenbaum). Brief footnotes accompany the translation, and a glossary is appended, although garum and liquamen have an appendix to themselves. With an experienced cook as one of the editors, it is not surprising that they claim that ‘it is simply not possible to theorize a recipe without testing it’, but this is not an edition designed to use in a modern kitchen. S.G.’s Cooking Apicius, Totnes 2006 is recommended in a footnote; Edwards, The Roman Cookery of Apicius is criticised for its misunderstanding of liquamen and recommendation of ‘many bizarre and entirely unsuitable substitutes’ for then unobtainable herbs and spices. What it does seek to do is ‘to solve the major problems of the text that … made reconstructing recipes so difficult.’ There are, of course, a host of minor problems of interpretation and universal agreement will not be achieved, but this book should be welcomed as a serious contribution to the understanding of Apicius.