A pen portrait of the author, Helen Saberi, taken from her website www.helensaberi.co.uk.

I am originally from York and it was there where I spent a happy childhood. I went to the local village school in Upper Poppleton and then studied at Queen Anne Grammar School. After “A” levels I went to do a Private Secretaries Certificate at Leeds College of Commerce. When I was 19 joined the Foreign and Commonwealth Office and in 1970 was posted to the British Embassy, Warsaw. From there I was posted to the British Embassy, Kabul. While working in Kabul I met my husband, an Afghan engineer. We were married in 1972 in England and returned to Kabul where we lived until 1980. During this time I continued to work at the British Embassy for the Commercial Secretary We had to leave Afghanistan in 1980 because of the Russian invasion and we came to live in England with our then 3 and a half year old son Alexander. We settled in Putney, London. In 1983 I decided to write an Afghan cookery book. I wanted to try to record Afghan cuisine with its rich and varied cultural traditions before they became lost due to the war and the massive exodus of refugees to countries all over the world. Noshe Djan – Afghan Food and Cookery was the first published in 1986 by Prospect Books and was beautifully illustrated by Abdullah Breshna. In the early 1990s I worked with Alan Davidson on The Oxford Companion to Food. This magnum opus was finally published by the Oxford University Press in 1999 to great acclaim. It was such a fantastic opportunity for me to have worked on this book with Alan and I feel very proud and honoured to have been, in his words, his co-pilot in completing the book. After the Companion was completed Alan and I wrote a little book, a sort of frothy light dessert to the main course of the Companion, called Trifle. We had great fun writing this book together, testing recipes and enjoying the fruits of our labours. After Trifle I went on to help Alan revise three regional seafood books: Mediterranean Seafood; North Atlantic Seafood; and Seafood of South-East Asia and these were republished by Prospect Books in 200x, 200x and 2003. Also during this time I helped Alan edit the Anthology The Wilder Shores of Gastronomy published by Ten Speed Press, Berkeley in 200x. This was also a fun project and we both enjoyed work on this tremendously In 2003 Alan was awarded the prestigious Erasmus Prize in the Netherlands. In a way it was a kind of glorious farewell for shortly after enjoying a week in Amsterdam receiving the Prize presented by Prince Bernhard and Queen Beatrix, Alan died peacefully at home in Chelsea on 2 December. I am now working on a new book about the Silk Road, I also continue to take an interest in Afghan affairs. My husband returned there after the fall of the Taliban to help with reconstruction at the beginning of 2002. I have visited Afghanistan three times since then and have recently become involved with a charity called Friends of Aschana. I would also like to mention a few other very worthy charities working in Afghanistan so that if you are interested you can visit their websites. AfghanAid, The Sandy Gall Limbless Fund, Khorasan and there are of course many others.

The foods that are treated as status symbols are interesting clues to different cultures. For many centuries in western Europe, the lavish consumption of sugar and meat were the surest sign of riches, until forced labour and intensive farming brought them within the reach of all. There was even a time when rotting teeth were coveted as indications of enviable sugar-eating. Very unlike our Nutrasweet era. Rich countries nowadays rate only a few foodstuffs as status symbols: truffles and gold leaf and finest beurre d’Isigny carved to look like mermaids, perhaps, but not much else. It is different in poorer countries. In war-torn Afghanistan, even using a large amount of cooking oil is seen as aspirational. Food that we might consider greasy (and hence poor) is seen by Afghans as a sign of affluence. This insight comes from Noshe Djan: Afghan food and cookery by Helen Saberi, a fascinating work which has just been reissued. Despite its modern poverty, Afghanistan has rich and sometimes surprising culinary traditions. The “basic diet of all Afghans” is composed of “nan, bread, and chai, tea”. Nan can be flavoured with nigella, poppy or sesame seeds, and is baked either in the family’s own tandoor or by a nanwaee at a local tandoor bakery. If the baker is a woman, grooves are made in the bread, if a man, then cuts are made. The finished bread might be served, means permitting, with a partridge stew, or aubergines cooked in yogurt, or maybe with kebabs, a radish salad and some coriander chutney. Not all Afghan dishes are quite so approachable. Saberi, who lived in Afghanistan for ten years and married into an Afghan family, describes its peculiarities with affection and even hunger – such as the taste for lamb’s fat, especially from the tail, or the use of rhubarb in savoury dishes (with spinach, for example, or lamb). Afghans are also partial to quroot, a kind of dried yogurt resembling “white pebbles”, which is reconstituted in water and sometimes eaten with garlic, salt, pepper and dried mint. The strangest-sounding dish in Saberi’s book is a sweet “silk” egg kebab, which is made by drawing threads of beaten egg across a hot pan until they go “silken”, a fabric which is then rolled up and sprinkled with sugar syrup and ground pistachios. Other Afghan puddings stick to familiar tastes for milkiness and rosewater. I made this custard recently and found it deliciously delicate, although it might not suit the tastes of those who dislike perfumed sweets: three of those I served it to were purring, while the other three pushed their plates away. The ingredients for six to eight would cost barely £1.50 in Britain, although Saberi says that, in Afghanistan, firni is a special-occasion sweet, reserved for weddings and Eid. But then, milk is another scarcity in the cities of Afghanistan, whereas here, as farmers know to their cost, it flows almost as cheaply as water, with no great status attached. Firni (Afghan custard): “50g cornflour, 1 litre milk, 275g sugar (or a little less – this amount makes the firni very sweet), ½ tsp ground cardamom seeds, 25g each of finely chopped or ground pistachio nuts and almonds. Mix the cornflour with a small amount of cold milk into a paste. Heat the remaining milk in a pan and, when hot but not boiling, add the sugar. Stir well. When the milk is close to boiling, slowly add the cornflour paste, stirring continuously. Bring to the boil, add the cardamom, turn down the heat and simmer for about five minutes, stirring frequently to prevent sticking. Pour the firni on to a shallow serving dish and decorate it with [the nuts] and allow to cool. Firni is always eaten cold.” 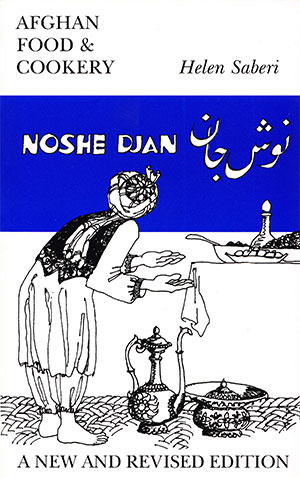 You're viewing: Afghan Food and Cookery £9.00
Add to basket