A Treatise on the Art of Breadmaking

A Treatise on the Art of Breadmaking

A Treatise on the Art of Bread-Making is England’s first complete book on the subject. Published in London in 1805, it was the work of a medical man, little known for any other books, save a couple of pamphlets on gout and sore throats and fever, which he observed in his native Uxbridge in Middlesex. His book on bread is by no means medical, but rather an entertaining and instructive tour through the whole process of bread-making from growing and harvesting the wheat, to developing satisfactory yeasts, running an effective bakehouse and investigating a whole variety of recipes for breads made not only from wheat, but also other grains, potatoes and rice. The book ends with a resumé of current law relating to the sale of bread, and an appendix containing the witness statements to a parliamentary committee on baking in 1804. This is a modern transcription of the original, now exceptionally rare and costing more than a £1,000 in the antiquarian book trade. There is a short introduction, but otherwise no editorial matter. An earlier version of this transcript was published by Prospect Books in 1993, but the edition is long since exhausted and the clamour for a reprint from enthusiasts of bread-making has been loud. The literature of bread-making in Britain is by no means as full as that on the continent of Europe. Because baking was a trade craft, practised by people barely on the verge of literacy, most instructions and technical lore were transmitted by word of mouth from master to apprentice down through the years. These instructions were deemed ‘secrets’ and the very idea of publishing them in a printed book would have been anathema. For this reason, there are surprisingly few recipes in domestic cookery books of the period, the authors reckoning that cooks would leave it to the bakers. The literature did not really kick off until the Victorian period, and only rose to a flood in the last quarter of the nineteenth century. After Edlin, the next person to tackle the subject was a trained baker in 1828; the value, therefore, of this first book is especially great, as no others exist. 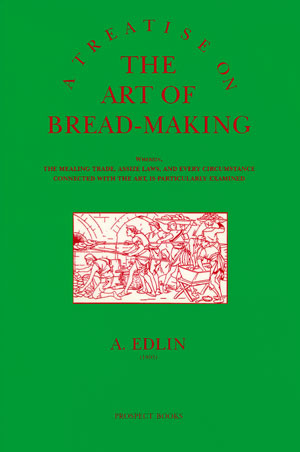 You're viewing: A Treatise on the Art of Breadmaking £11.25
Add to basket