Translated from the Persian by
Saman Hassibi & Amir Sayadabdi

A Persian Cookbook: The Manual

A Persian Cookbook is a unique historic cookery book. The original manuscript was drafted by Iranian, Bavarchi Baqdadi, after a spiritual journey in 1521. Bavarchi is the Persian synonym for cook, and, as is apparent from the text, cooking was his and his father’s profession. This will be the first English translation of this earliest classical cookbook which has survived, so it will be welcomed by both culinary scholars as well as enthusiasts for Persian cookery, which has recently become extremely popular.

The book gives recipes, and serving instructions, for a huge variety of filled pastries, colorful pilafs, and sour stews. Many of these sixteenth century Persian dishes are not well-known today, and the book will be a fabulous new source of authentic Persian recipes.

It also provides insight into Persian haute cuisine from the early sixteenth century, vital for culinary enthusiasts worldwide. The dishes of the lower classes are also touched on but presented in a manner suitable for the Safavid court. The book paints a different picture to what has been published before, covering a myriad of food types. A few of the topics include On Breads, On Grain Stews, On Chickpea Soups, On Sour Stews, On Pilafs, On Colourful Pilafs and On Filled Pastries.

The translators, Saman Hassibi and Amir Sayadabdi are food scholars and doctoral candidates at the University of Canterbury (New Zealand).

Review by Charles Perry of the Culinary Historians of Southern California

There’s great big news in Middle Eastern food history. Persian cuisine — the most influential in history, deeply affecting the Arab world, Central Asia and Northern India — is shockingly all but unrecorded. Not a single cookbook has come down to us from before the 16th century. But now two Iranian scholars have just translated one of them, the Kārnāme (1521) — saving me the trouble, I’m glad to say. I wouldn’t want to stake my reputation on my knowledge of Farsi.

So this is a very important book. It shows us many things, starting with the survival of the medieval sort of stew, lavishly flavored with fruits and spices, which could be incredibly complex — one recipe for runs nearly 2 ½ pages. There are also simpler home-style dishes and some modern names familiar from Indian menus: dopiaza and roghan josh.

And there’s baklava. In fact, although the word is Turkic and one of the recipes explicitly connects it with a place in Turkey, this book gives the earliest written baklava recipes. They are (like those in Iran and Afghanistan today) rather laboriously fried, rather than baked, as the earliest Turkic recipes themselves might also have been. Amazingly, two of the recipes are stuffed with lentils, rather than nuts. (Though we think nothing of the Chinese dumplings stuffed with red beans.) A friend of mine who has contacts at the Topkapi Palace in Istanbul tells me there are centuries-old recipes for lentil baklavas there as well.

The typical Persian bread has always been nān, baked in a tandoor oven, but in this book it is essentially supplanted by komāj, originally a sort of tortilla cooked either in the ashes of a fire or on a special pan. By the 16th century it had evidently turned into a substantial bread baked in a sort of Dutch oven set on embers with more embers on top, as for the traditional Basque sheepherder’s bread. Unlike tandoori nān, it could be stuffed, and it was — you had komāj-e beh, which is essentially quince dumpling (like apple dumpling), a sort of pie with a meat or nut filling, and the fantastically baroque qabuli komāj, which includes all these ingredients and more, including pastas. For that matter, this was a startlingly pasta-heavy cuisine. No fewer than 16 varieties are called for, from little soup noodles to big stuffed pastas.

I have a few quibbles, because I like nothing better than a quibble. The authors have been misled by a dictionary entry to speculate that the Central Asian steamed dumpling mantu or manti was originally made from tripe. They think tutmaj, the name of a Turkic pasta consisting of sheets of dough, means “sumac stew.” And they don’t seem aware that the word āš is a food name of both Persian and Turkic origin, which explains why it sometimes means soup, sometimes stew, sometimes pilaf.

The first part of the porridgy rice dish šilepalaw is not a (nonexistent) word meaning soft but shilön, the Mongolian name of this dish — basically the only Mongolian contribution to world cuisine. The book has a recipe for pomegranate āš and one for pomegranate-seed āš. The distinction is that the former is made from fresh pomegranate juice, the latter by reconstituting the juice of dried pomegranate. End of quibbles.

A few notes on language: The translators live in sheep-raising New Zealand, which recognizes a stage between lamb and mutton called hogget (a lamb older than one year but with only two permanent incisor teeth), so many of their recipes specify hogget. Don’t worry, most of the lamb in our markets would qualify as hogget.

Persian has a lot of loanwords spelled with the Arabic consonant qaf, which is a sort of k pronounced deep in the throat. In Farsi, though, it is pronounced as gh, a gargling sound a little like the Parisian r, so the translators have decided to render both gh and q as q. This is a neat way of doing things, but it means you’ll have to get used to seeing words you may know from restaurant menus such as morgh and gheimehspelled morq and qeyme. They spell the voiceless equivalent of this sound as x, the ch sound as č and the sh sound as š. A word you may be used to seeing spelled with an o may appear with a u; so ghoreh, “sour grape juice,” is qure.

All quibbles aside, though, this book is a most welcome addition. 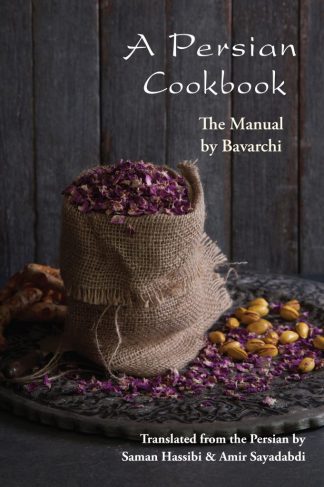 You're viewing: A Persian Cookbook £15.00
Add to basket