This review of William Lawson is by the garden-historian Anthony Lyman-Dixon. This was printed in issue no.74 of PPC and certainly gives an alternative take on the work of William Lawson. A further instalment of Lyman-Dixon’s thoughts on the matter is expected in PPC 76 (yet another good reason to subscribe). William Lawson a covert hermetic? William Lawson was for many years the parish priest of Ormesby in Yorkshire. In between his parochial duties, he became an enthusiastic and highly experienced gardener and apple grower, so much so that he was prevailed upon by his friends to put his knowledge into print. The result, appearing in 1618, is the book under review. Lawson was both of and ahead of his time; although writing between Hill and Parkinson, he was without their pretensions and his skills were solidly grounded in the Yorkshire dirt. He scored a number of ‘firsts’ and was arguably the original ‘Greenie’, allowing no fumigation in his orchards. He preferred songbirds to people, and long before the ‘hunting parson’ became a familiar feature on the rural landscape, he took a swipe at the cost of riding to hounds and the destruction it caused. Apart from being the first gardening writer to specifically target a Northern readership, he was also the first to advocate the splitting of the vegetable garden from the flower garden, the first to propose mazes that ‘well framed a mans height’ and original in championing the employment of women. Moreover, he was a liberal before his time, claiming that the best way of dealing with theft was to give surplus produce to the incipient villains. Thus he has become a darling of garden historians, referred to in almost every garden history and, with his illustration of an idealized layout, perhaps the most reproduced of all horticultural authors of this period. Given its remarkable popularity, it seems all the more extraordinary that the iconography of this celebrated picture should be so steadfastly ignored. Current writers who have taken it literally and described it as ‘not very unhelpful’ and ‘strange’, have clearly missed the point. Far from being an idealized vicarage garden, it is that of an alchemist, replete with hermetical symbolism. Admittedly an alternative explanation can be offered for the boundaries and for every feature contained within, but this ambiguity may ascribed to a somewhat naïve attempt by Lawson to cover his back against allegations of unorthodoxy. It is an inescapable fact that the whole is undoubtedly greater than the sum of its parts. Moreover the section in his text on ‘ornaments’ supports the contention that this was the garden of an educated hermetic. Why did Lawson, who was so low-church that he refused to employ gardeners with the slightest whiff of popery about them, do it? To what extent was he influenced by the Hypnerotomachia polyphili, a raunchy best-seller translated in to English approximately a decade earlier and which echoed his delight in nature? Hypnerotomachia, written by Francesco Colonna (another churchman, albeit a Catholic with a distinctly dodgy reputation) was overtly alchemical but in at least one instance, whether by accident or design, Lawson actually enlarges on its symbolism. Why did he risk his job with such a heretical design? Above all, how did he get away with it? Several theories can be advanced: that Lawson was neither an alchemist nor a randy cleric, but that he had fallen for the imagery in Hypnerotomachia and thought it would make a great setting for the parties he so evidently enjoyed. He could have been influenced by the teaching of the Franciscan alchemist Ramon Lull who, though he had been martyred in 1316, had an ongoing influence in horticultural circles: ‘finding in trees and herbs a type of the divine potency by which the natural world might serve as a ladder to the spiritual gardening and alchemy continued to be associated in actual practice,’ remarked the great art historian, Edgar Wind. My personal theory however, is that Lawson was having an enormous laugh at the expense of his contemporaries and the po-faced garden historians who followed them. After laboriously distilling his ‘Forty and eight yeares labour’ in to a didactic text full of Yorkshire common sense, he thought to lighten it with a private joke the point of which was obvious only to his friends. This seems typical of the man described by John Beale a generation later, as possessed of ‘many signs of honesty and integrity [and] a sound, clear, natural wit.’ Nevertheless it was a joke whose consequences could have cost him dear. It may be that he gambled on the old medieval concept that ‘it took one to know one’ and that any prosecutor recognizing the symbolism might himself be thought guilty of incorrect thinking. All the same, it seems a risk scarcely worth taking, especially by a man who so obviously enjoyed life to the full. As it was, he died well respected and much loved at the age of 82. With the amount of Lottery funds currently being squandered on northern ‘attractions’ no one wants to visit, I suggest it would be a fitting memorial to one of Yorkshire’s unsung heroes to build Lawson’s mythical garden in the decaying industrial wastes of Teesside. Perhaps some of the magic would rub off on the devastated environment. 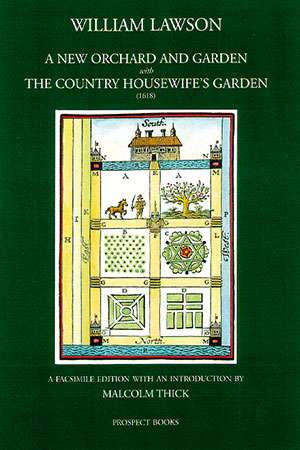 You're viewing: A New Orchard and Garden with The Country Housewife’s Garden (1618) £11.25
Add to basket