View basket “Wrapped & Stuffed Foods” has been added to your basket.
Sale!

A PDF of the preliminary pages and the text of Chapter 3, “A Good Bank Account, a Good Cook, and a Good Digestion”

’The story of cooking in civilisation and daily life’, the sub-title of Michael Symons’ third book on cooking and food announces. It might equally have been ‘how cooking made us civilised and shapes our daily life’. Symons’ ambitions are larger than the title, which is large enough. The magnitude of his task is contained in a paradox. Any account of cooking should take us outward, in his view, to the nature of society itself because cooks are at the centre of and integrate a vast activity of acquiring, organising and distributing nutrition and good in its broadest, social and ethical senses. But up until now, and because we have reduced cooks to menials, we have understood what they do by disaggregation downward to the technical, the nutritional and the economic. Cooks are central, yet hidden in the kitchen; cooking is source and metaphor of social life, but diminished to the domestic and anonymous chores of chopping and heating and serving.

To redeem cooks, Symons thinks, is to reclaim life. It is also to banish modern doctrines that repudiate life. The restitution of cooking as an object of intellectual inquiry – where it had been in the nineteenth century and earlier – will help us to resist what he regards as an even more pernicious modern disaggregation than that of cooking to the following of recipes and dietaries. In his view the most dehumanising and least true of our recent heresies is the reduction of our complex and ethically rich systems of sharing and cooperation to the selfish and ethically neutral acts of production and exchange imagined by classical economics and its modern epigones. Cooks share, and nothing they do is more important. Pudding is in the last analysis an argument in morality and political economy, a reclamation of the ethical drives of nineteenth-century sociology represented in the work of Marx, Weber, Durkheim and Simmel. The great task, Symons quotes the Russian Berdyaev as saying, is “to overthrow the rule of money and to establish in its place the rule of bread… The kingdom of money is fictitious, the kingdom of bread is a return to realities” (p. 125).

The literary hero of the book, in so far as it has one, is the early nineteenth-century French food writer Jean-Anthelme Brillat-Savarin who, Symons acknowledges, “tended to pay more attention to enjoying than to preparing dinners” (p. x). Brillat-Savarin’s distinction in Symons’ eyes was to be a “gastronomic thinker”: he wrote about the preparation and consumption of meals in their social totality. Defining and defending gastronomy, and teaching us to think gastronomically, is Symons’ second great task. He enlists the aid of politics, economics, history, sociology, philosophy, theology, science, literary criticism and philology. There are no modest proposals here. It is not enough for Symons to have cooks taken seriously as exponents of what is necessary to keep us alive; gastronomy would have us place cooks at the hub of the world, and then elevate finding out about what they do to the status of a major epistemological system. Gastronomy is not simply interdisciplinary; it is the philosopher’s stone capable, Symons would like to persuade us, of integrating our complex and otherwise heterogeneous understandings of our existence as social beings, and thus of transforming the dross of our present alienation – from good food, good dining and good company as well as from ourselves – to the gold of rich and replete, because social and communal lives.

Since food and cooking are everwhere in time and place, Symons decides he must be too. He is as heterodox in his sources (which he lists in his compendious bibliography) as our modern cuisine itself has become, ranging over all times and all continents, finding inspiration in the etymologies of words – so many of the words by which we express various forms of community have their origins in aspects of cooking – the practice of ancient societies, the ethical systems of world philosophies and, especially, the glorious intellectual pretensions of those nineteenth-century food writers (usually French) he calls gastronomers. Gastronomers, then, are eclectics. What else they are is less certain. The term gastronomy shimmers here like a distant heat haze, more suggested by allusion and indirection than established by definition and example. Its practitioners study cooking and eating in their widest ramifications as fundamental constituents of our social and ethical lives. They are polymaths who know history and literature and languages and nutrition and physics and chemistry and economics and politics and and philosophy and ethics and religion – and cooking, or at least eating. In what sense gastronomy is a system of knowledge, an epistemology, is less clear.

Such ambition in the hands of a less skilful and engaging writer might have produced a leaden stew of platitude, pretension and poor history. The ingredients are certainly rich and diverse, easily enough for most of us to make a hash of. But like his culinary hero Phillip Searle, who opens and closes the book, Symons combines his materials with wit, discernment, and an intuitive grasp of what is possible. His new book is an important and sustaining contribution to food and life. Its chief defects are visual rather than intellectual or culinary. The napery that enfolds the book is an unappetising dirty brown – the colour, presumably, of the eponymous pudding. The inanimate hero of the text is the cooks’ knife, to which a clever chapter is devoted, yet on the front cover a silver spoon sits on the soiled tablecloth. The drawings inside are mere space fillers, the visual equivalents of iceberg lettuce in poor pub grub, the chief effect of which is to return cooks to the anonymous drudgery of our stereotypes. Skip the pictures, and dine on the text. 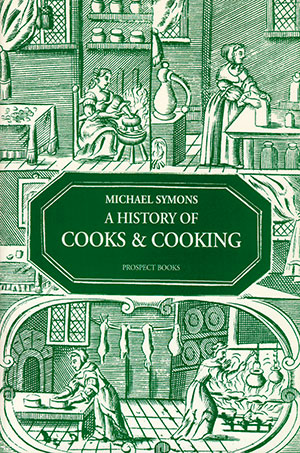