ANDREW DALBY, PHILIP HYMAN, RACHEL LAUDAN, HELEN SABERI, BARBARA SANTICH, JOHN WILKINS, and C. ANNE WILSON are editorial advisors to PPC. PETER BECK is a freelance journalist and farmer. He has cooked in restaurants in Italy and farmed in Maine, Virginia and Hawaii. His piece was written while studying at Yale. DAVID BURNETT is a publisher, most recently at his Excellent Press in Ludlow. He is the author, with Helen Saberi, of The Road to Vindaloo, a Prospect book. ALISTAIR ELLIOT’s Roman Food Poems is a Prospect book. He is a distinguished translator of classical drama and poetry as well as a poet. NICOLAS GRAY is the son of Patience Gray. He was master of a barge and is a community activist. He lives with his partner, the photographer, journalist and fellow-bargee Maggie Armstrong, at Spigolizzi in Apulia. A.R.T. KEMASANG is an Indonesian writer and researcher living in London. He is author of articles and longer studies on the history of tea and on the Chinese in Indonesia. ANTHONY LYMAN-DIXON has written much on the history of herbs and other edible plants. His piece is part of an encyclopaedia in progress. JOSH SUTTON is the author of the camping cookbook Guyrope Gourmet (Punk) and is a freelance writer. His piece is a chapter from his forthcoming book with Reaktion, Food Worth Fighting For, which is a study of food protests from bread riots to more modern expressions of alarm and concern. WILLIAM SAYERS is Adjunct Professor of Comparative Literature at Cornell University. His collected essays on the meaning of some food words are being prepared for publication by Prospect Books. MALCOLM THICK is a garden and agricultural historian with a particular interest in vegetables and market-gardening. His biography of Sir Hugh Plat came out with Prospect in 2010. JOJO TULLOH is a journalist and writer whose most recent book is The Modern Peasant (Chatto). JOHANNA MARIA van WINTER was Professor of Medieval History at the University of Utrecht. She specializes in the history of food, and of the Knights Hospitallers. Her Spices and Comfits is a Prospect book.

I hope that the founders of Petits Propos would be gladdened by the appearance of this, the hundredth issue, 35 years after the first unnumbered PPC, dated February 1979. Once up and running, it was to be published three times a year. Had that schedule been maintained, this anniversary number should have been printed in autumn 2012, so we are not too delayed. I must confess that the delay, such as it is, is entirely my fault. In the tender care of Alan and Jane Davidson (up to and including PPC 63), they kept up to the mark. The slippage has occurred during my tenure, from PPC 64, which was issued in April 2000. I am grateful to all those who have contributed to this and any earlier issues. They will know only too well that such service is a gift and the recompense is naught beyond a few complementary copies. The continuance of PPC relies on these people, as it also does on those who generously subscribe, both here and abroad. Do not think your contributions go unrecognized. PPC 100 is bumper. It contains excellent articles from some of our Editorial Advisors as well as pieces from other independent spirits – all of which are sure to stimulate some positive reaction from often supine readers. PPC 100 is also in a new format. As my eyes grow older, I find I need that help in reading which derives from clear and spacious typography. I trust the change irritates no one, although it may distress those who like tidy bookshelves filled with uniform runs.

A harsh reminder of our dependence on modern methods of communication has been delivered to the residents of Allaleigh, the hamlet in south Devon which is headquarters of Prospect Books and PPC. The overhead telephone cabling was blown down in a storm on the night of 5 February. We might have expected an effective response from the ’phone company but it was not to be. It has left us without any service for the whole month.  One might wonder if we do indeed live in a ‘rich nation’ (the Prime Minister’s phrase when offering to pay for flood damage that might have been prevented by more timely action on his administration’s part). One might also wonder what was the original point of privatization (better service, they said) when it was undertaken by the Thatcher administration. In the event, it has unmanned us. It’s not enough to say, ‘Write a letter’, because all too often we don’t have the correct address. And, in any event, has any of you paid for a stamp lately? I therefore apologize for any failure to respond to emails, to make payments, to discover correct facts while copy editing, to calculate the royalties, to generally make progress. A steady, uniform gait over life’s hurdles is a good approach which leads to sound sleep; however, the world now demands a different pace and slipping from one speed to the other is difficult as well as unsettling.

WHEN PHYLLIS MAKES A PUDDING!

Peter Brears very kindly sent a small product from his reading in the shape of a poem printed at the end of The Band of Hope Cookery Book (Whitehaven 1907). It’s charm is palpable and we are grateful to him. The poet is one A.L. Harris. I do not know of any other work by him.

When Phyllis makes a pudding She puts on a cotton gown, Looks up a work on cooking, And consults it with a frown. Then dons a cooking apron With the latest thing in bibs – To call it unbecoming Would be merely telling fibs. She pats and pulls, and strokes it With a slightly anxious look – As though it were the apron, Not the girl, that makes the cook. Descending to the kitchin, She is ready to begin – With calm determination, See her grasp the rolling-pin! With sleeves above the elbow Which her dimpled arms disclose, And a little dab of flour on Her retroussé little nose. She looks so fascinating With one eye upon the book – But in the end you wish she’d Left that pudding to the cook!

The Symposium will be held on Saturday 17 May 2014 at the Friends’ Meeting House, Friargate, York, YO1 9RL. The subject will be ‘Kitchen Technology in England from 1600 to the Second World War’. If you wish to enrol, send a cheque for £20.00 made payable to Leeds Symposium on Food History, with your full name, address and telephone number, to Leeds Symposium on Food History, c/o Special Collections, Brotherton Library, University of Leeds, LS2 9JT. If you wish to participate in the communal lunch, please bring one dish, either savoury or sweet. The speakers for this year include an introduction by Ivan Day, Peter Brears on charcoal and steam; Giles Cowley on wrought iron and steel; Tony Weston on spitjacks; David Eveleigh on gas; and Michael Finlay on pastry jaggers. Quite appetizing I think. C. Anne Wilson has retired with honour from her role of overall co-ordinator (see the piece later in this issue), and the direction of the symposium has been taken over by a distinguished committee, with a secretary. His address is: Robert C. Whitehouse, 5 Parkland Drive, Darlington, DL3 9DT, e-mail: <robert@robertwhitehouse.com>; and website: http://www.leedsfoodsymposium.org.uk.

The 2nd Biennial Dublin Gastronomy Symposium will take place in the School of Culinary Arts & Food Technology, Dublin Institute of Technology, Cathal Brugha Street on the 3th and 4th June 2014. I quote their brief description: ‘The theme is “Cravings / Desire”. This theme can be interpreted in the widest possible manner ranging from craving or desire for better food and wines, more knowledge about food and beverages, fast food, street food, food in pregnancy, authenticity, novelty, health properties, body image, aphrodisiac, food porn, food as hobby or pastime, food for profit, cultural capital, economic and social status etc. Details of the call for papers are posted on the DGS website http://arrow.dit.ie/dgs/. Participants can expect Irish hospitality, lively discussion, great food and a collegial environment to share their passion for gastronomy with an international collection of like-minded individuals.’

The Symposium will be held this year on 11–13 July; the subject is ‘Food and Markets’. A call for papers and registration materials have already been posted on the Internet at the website: http://oxfordsymposium.org.uk. The costs are closely detailed on the site and they range from £205 (£105 for students). If you want accommodation and the full package, it is of course more. It is held, as usual, at St Catherine’s College. If you need to correspond you can write to: Priscilla White, Registrar, The Oxford Symposium, 27 Hawley Square, Margate, Kent CT9 1PQ, UK.

This journal, which we have come to know and love, has a new editor in Melissa L. Caldwell of the University of California, Santa Cruz. And it has a new masthead: no longer to be ‘The Journal of Food and Culture’ but hereafter ‘The Journal of Critical Food Studies’. This indicates, I take it, the capture of Gastronomica by working academics. Who would have thought that so short a while since Alan Davidson and Theodore Zeldin attempted to persuade Oxford University and the occasional rich English benefactor (mostly Lord Forte if I recall it correctly) that ‘food studies’ were a valid sphere of academic endeavour we would see such an international superstructure of conferences, departments, professors, lecturers and post-graduates arise on this very foundation? There were many people (though never enough) in the 1960s and 1970s who realized that food should be taken more seriously: that it had a resonance beyond mere feeding. But while embracing this wider vision, it was closely allied to a sense of delight in the actual food on one’s plate. One can see too that this was the stance of Brillat-Savarin and his later disciples. But when I wade through yet another incomprehensible, turgid or tendentious piece about food in its academic, cultural studies, sociological, political or genderish context, I sometimes miss that delight. I fear for our world if it falls too completely into the hands of serving academics. They seem to have little interest in communicating beyond their own microcosm. So I hope Gastronomica does not put aside its earlier glories.

Many of you will have enjoyed Tim Hayward’s explosion onto the gastronomic literary scene with his journal, Fire & Knives, and the more recent, and short-lived, starburst from Kate Hawkings’s Gin & It, the liquid half of the equation. All is changing in this camp and we received an explanatory message, the nub of which I give as follows: ‘We have been working very hard on what turned into a “rescue package” for both Fire & Knives and Gin & It. As we’ve made clear from the very beginning, neither magazine was ever intended to do more than cover its own costs but, as time has gone on and the market for independent food magazines has transformed from a desert into a busy shrubbery, even that modest requirement has long evaporated. Our well-intentioned attempt to consolidate the magazines and to publish as an annual proved not to be economically viable. … Towards the end of this depressing journey we’ve realized that our only real hope was to find someone rich enough not to need the money and altruistic enough to give it to us rather than a deserving charity. At that point, it seemed kinder to admit that, financially at least, our grand experiment had failed. In financial terms, we are forced, today, to regretfully pronounce both Fire & Knives and Gin & It dead but we hope that what those names stood for – a brave experiment in uniting writers and readers at a chaotic time in publishing – will be remembered and might live on in other incarnations.’ 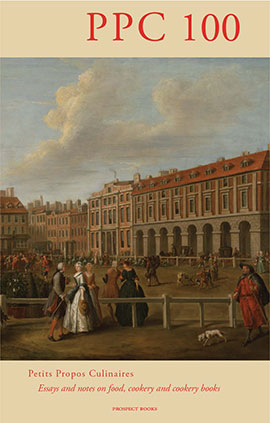