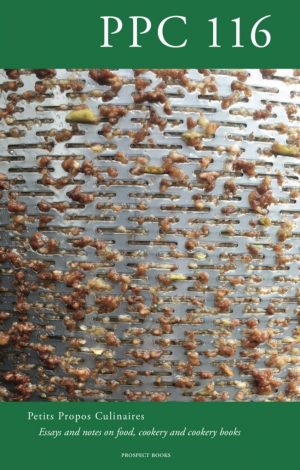 PPC 116 kicks off with the meaty subject of cultural appropriation. Did white cooks in the Southern USA states, Carolina, and the famous Louisiana,  profit from selling dishes with African-American antecedents? Can any culture be said to own a food culture? Another culture discussed is Scottish enlightenment, an invented identity we are all familiar with, haggis, neeps, kilts, whisky and more. Blake Perkins discusses these issues in his article.

We have an article from the learned William Sayers, (author of Eatymologies, Prospect Books, 2015) on The Origin of Epergne. So, what is epergne? Is it a fiery pepper, a French cooking utensil, or some other erudite ingredient? You will have to read the issue to find out, or use Google.  But then you will forget how to spell epergne and be lost again....

Also in PPC 116 is an article on gudgeon, or is it 'Goujon'? from Alison Locker. An extract from Alison's article is below.

Authenticity and Appropriation – The Southern United States and Scotland

A Food Craze in Europe: The pain intégral in Belgium around 1900

The Gudgeon: A Lost ‘Goujon’ of Delight in England?

‘Close, but no Cigar’: A Fairground Revival Dish

Ottoman Kebab Culture and the Rise of Döner Kebab

The Origin of Epergne

Extract from Alison Locker on The Gudgeon

Firstly, I must admit to never having eaten gudgeon. Perhaps it is the result of having prepared so many skeletons as reference material in archaeological work, often from fish in various states of decay, that I am very conservative in the fish species I eat. However, while researching a book on freshwater fish I was surprised how often this small cyprinid was lauded as entertaining for anglers and as a delicious dish. The latter was particularly surprising as much of this culinary praise was written at a time when freshwater fishes in general had fallen out of favour on most English tables. Once, many species had been kept as store fish in ponds on élite country estates, in towns as fishmongers’ live supplies and, more rarely, in ponds managed by the peasantry. These fish were ‘grown on’ for the table, brought in as store fish. Breeding fish, often bream and later carp (in English ponds from the later fifteenth century) were selected on physical characteristics thought to produce good offspring, but the process was entirely natural. Artificial breeding was first practised on brown trout by stripping the eggs and milt from the breeding stock, mixing the two and raising the fertilized eggs in a perforated box sited in running water. There are claims that this was first practised by a Benedictine monk, Dom Pinchon at the Abbey of Réome (eastern France) in the medieval period, but there is no supportive documentary evidence. The published work of Ludwig Jacobi in 1763 is the generally accepted forerunner of much of the experimental work on artificial breeding that proliferated through the nineteenth century, mostly on salmonid species (Nash 2011).

In England the main fish supply was focused on marine fish which, by the medieval period, could be delivered to most of the country both as fresh and stored fish – salted, dried or pickled. Fresh fish were more costly inland as they incurred greater transport costs for fast delivery; stored fish were mostly cod and herring. The dominance of marine fish is supported by the analyses of fish bones from a large number and variety of archaeological sites. By the nineteenth century, with railways, icing and improved fishing vessels, fresh marine fish were ever more affordable nationwide.

In this context it is interesting to find the gudgeon survived as a niche food, still valued by nineteenth- and twentieth-century fish-lovers, both sporting and culinary. Gudgeon, along with other small freshwater fishes such as minnow, stone loach and bullhead, were once eaten, but they did not form part of the English pond culture of the Middle Ages and early modern period. Other countries were more appreciative and, despite their small size, the stone loach was kept in ponds in Sweden as a food store in the seventeenth and eighteenth centuries (Lundberg and Svanberg 2007).

The gudgeon (Gobio gobio L. 1758) is a small cyprinid, with a natural distribution that encompasses southern England, southern Scandinavia and east across central Europe. Other gudgeon species have localized distributions within Europe. A small fish, rarely over 12–15 cms, it has a long body with a distinctive barbel on each side of the mouth. Coloration is olive brown with a paler belly and distinctive darker blotches on both sides of the body and on the fins. As a young fish it might be taken for a loach, while adults are sometimes mistaken for immature barbel. This is a fish that prefers running, well-oxygenated waters on a clean substrate of sand and gravel. Although it can be found in lakes, other larger cyprinids were favoured for pond culture such as bream, tench, roach, dace and later carp (which was to overtake the bream as prime pond fish). All these fish can thrive in still waters on muddy substrates. Gudgeon were and are common in many rivers and canals in England beyond their natural range through introductions, often as bait fish.