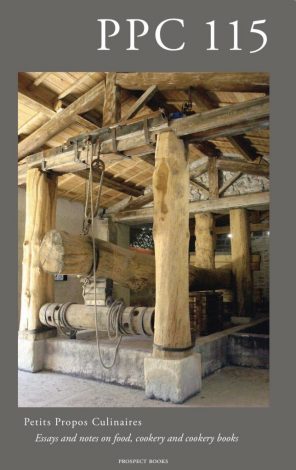 Modern Recipes: a Case of Miscommunication

Gender, Intersectionality and Disease: the Consumption of Bat Meat in the Mount Cameroon Region

Archestratus in Perspective: the Ingredients

The Egg in European Diet and What it Tells Us

Tracing the Original Owner of an Irish Manuscript Recipe

The Hidden Lexical Lives of the Fool, Trifle and Gooseberry

PPC 115 has everything from eggs to brandy snaps, trifle to bat meat. Here is an extract from an article on the consumption of bat meat in the Cameroons, where I imagine bats are not a protected species, as they are in a great deal of the Western world. Sadly, the article touches on the transmission of ebola, just as the aids virus HIV was traced back to the handling of chimpanzees, gorilla and bats.

Gender, Intersectionality and Disease: the Consumption of Bat Meat in the Mount Cameroon Region

The hunting of bushmeat, the meat of wild animals, is an ancient practice and a common behaviour in rural African villages, particularly in forest areas. Bushmeat has long been a part of the staple diet of forest-dwelling peoples in Africa (Fa et al. 2000), but the hunting and eating of bushmeat by humans carries a substantial risk for cross-species transmission (Wolfe et al. 2005). Until recently, this interaction and relationship has been considered an important source of wildlife infectious diseases transmissible to humans (Daszak P., Cunningham A.A., Hyatt A.D. 2001; Kilpatrick A. M., et al. 2006a).

Several very important zoonoses (diseases which can be trans- mitted to humans from animals) have emerged or re-emerged from wildlife species. For instance, HIV is alleged to have been transferred from primates to humans, probably during hunting (Barre-Sinoussi 1996); Ebola outbreaks have resulted from the handling of the carcasses of gorilla, chimpanzee or bats (LeRoy et al. 2004); and Severe Acute Respiratory Syndrome (SARS) is said to have originated from small wild carnivores (Peiris et al. 2004). According to the World Health Organization (WHO 2014), ‘Ebola is introduced into the human population through close contact with the blood, secretions, organs or other bodily fluids of infected animals.’ Fruit bats and other wildlife, especially non-human primates, are considered to be the natural host of the virus. Accordingly, the emergence of disease is the result of an interaction of social, demographic, and environmental changes in a global ecology and in the adaptation and genetics of the microbe, influenced by international commerce and travel, technological change, breakdown of public health measures, and microbial adaptation (Learmonth 1988, Wolfe et al. 2005, Jones et al. 2008, Hayman et al. 2010). In the southern forest of Cameroon, like in most tropical forests in sub-Saharan Africa, the building of roads provides access to wildlife and is often associated with increased demand for, and access to, bushmeat. This process is thought to have led to spillover of zoonotic viruses such as simian immunodeficiency viruses and the emergence of HIV-1 and -2 (Hahn et al. 2000). Ebola haemorrhagic fever (EHF) virus outbreaks in humans have repeatedly been linked to the handling of infected great apes (Leroy et al. 2004). With the expansion of human populations, there has been an increase in demand for bushmeat, particularly in locations where alternative sources of protein have been scarce (Bulte and Horan 2002; de Merode et al. 2004; Fa et al. 2000). It is therefore likely that the risk of future disease emergence through this process will also increase (Daszak P., Cunningham A.A., Hyatt A.D. 2001).