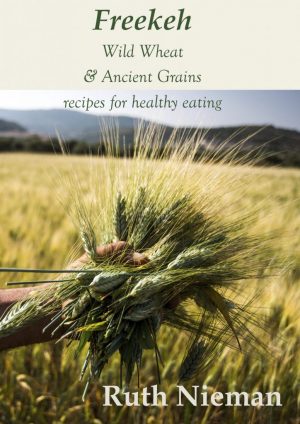 Ancient supergrains, now modern staples, are growing in popularity in our health conscious age. Ruth Nieman has been cooking with these grains for many years, and she is an expert on the cultural, historical and biblical background to their use in the culinary arts. The book will feature freekeh, (from the Arabic ‘to rub’), now known as a grain and sold in many health food and grocery shops; the main staple famed in the Old Testament as a first grain offered up to the Temple in Jerusalem, grown by the ancient Israelites. The harvesting of freekeh, barley, emmer, rye,  sorghum wheat, and spelt govern the landscape of Israel’s Judean hills and the lush northern region, known as Galilee.

Ruth's recipes  are for the modern day, and the modern kitchen, although their basis is in ancient cooking practises. They bring to life recipes used in times gone by. A book for those who wish to have a clean and easily digested diet, which can now be found in this extremely tasty cuisine, brought to everyone who wishes to expand their culinary knowledge.

Ruth Nieman was a practising nurse for many years. In 2017, she published her opus, The Galilean Kitchen. Giving talks and supper club appearances all around the South East, many of them to Jewish groups, Ruth has built up a reputation as a brilliant raconteur and cook. She lives in North London.