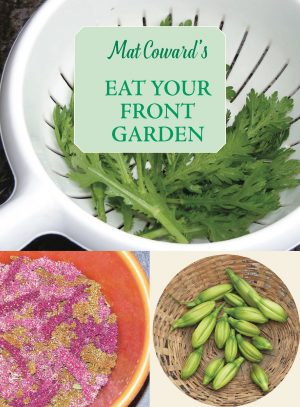 Eat Your Front Garden, which could be called the “invisible allotment,” offers suggestions for edible plants which are easily grown in ornamental gardens. The book gives detailed advice on how to grow and eat the produce from these plants, many of which you may already be growing. Your front garden won’t look like an allotment, but you’ll still get a significant amount of food out of it.
There are plants here which are bona fide ornamentals which, to many people’s surprise, have edible parts. Then there are species which are grown as ornamentals in this country, but which are considered vegetables elsewhere. Hosta is a good example; in Japan it’s grown as an agricultural crop.  Finally there are lesser-known edible plants, like the Cinnamon Vine (Dioscorea batatas) which is a charmingly-perfumed climber - as long as you don’t tell anyone it has another name - Chinese Yam -  and you’re going to dig up the roots, eat them raw or roast them.
Mat Coward is a writer,  journalist, and scriptwriter. He writes a gardening column for the Morning Star, and is a scriptwriter on the cult TV show, QI for the BBC. He is the author of many books, including crime novels and children’s books.
Shopping Cart