Beppina and the Kitchens of Arezzo 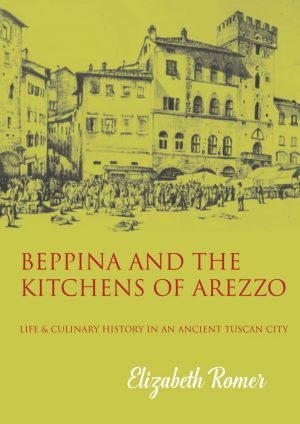 BEPPINA AND THE KITCHENS OF AREZZO

Life and Culinary History
in an Ancient Tuscan City

Elizabeth Romer has a small apartment in Arezzo, which she and her husband live in during the winter months when their Tuscan farmhouse is cut off by bad weather. She has spent hours wandering in the small back lanes, visiting shops and the small back kitchens. One day she she bought an old recipe book of Artusi’s, owned by a woman called Beppina, and became inspired by the Jesuit recipes she found in the dusty shop.

Elizabeth Romer researched the recipes, finding a tomato sauce (sugo di pomodoro) recipe from 1891. She also enthuses about recipes for delicacies including artichoke tart, and drowned trout, to name just a couple.

She tells us about the culinary history of the region. From Baroque times to the present day, the reader will feel they are walking through the market and gardens of Arezzo, sampling wines, cheeses and country produce.

Elizabeth Romer was born in Wales, went to the Royal College of Art and lived for many years with her husband in Egypt. In 1972, Elizabeth Romer and her husband bought a farmhouse in Tuscany, near Arezzo, where she wrote her first book, The Tuscan Year (1984), describing the daily lives and cuisine of her farmer neighbours.