A Catalan Cookery Book: A Collection of Impossible Recipes 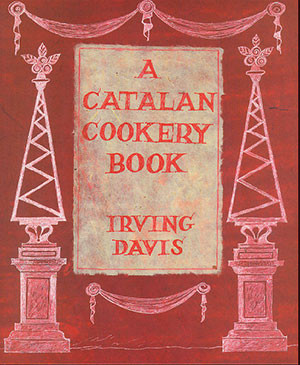 A Collection of Impossible Recipes (now available on amazon.co.uk)

This book was privately published in 1969 after the author’s death. It was edited and introduced by Patience Gray, who herself needs no introduction to Prospect readers. Echoes of Irving Davis, antiquarian bookseller, publisher and man of letters, abound in her own masterpiece Honey from a Weed. This book is a fragment – he was a man who sought perfection – and yet is complete enough for us to enjoy, and to cook from. He called his recipes ‘impossible’ because he despaired at substitution, or derogation from the original. ‘Macaroni in the oven’ calls for the blood of a chicken, other dishes are equally demanding. In the time since it was first written, authentic provisions and materials have become more available in Britain, the book less impossible. The welcome afforded the recent reissue in Britain of Colman Andrews’ Catalan Cuisine is a mark of the esteem attached to this style of cookery. Irving Davis’ book is a perfect introduction; its limpid prose is a reminder of past habits of mind. There are sixty recipes, from soups to sweets, taking in a summer and a winter drink along the way. There are also eleven fine engravings by the artist Nicole Fenosa, at whose home in Vendrell Irving Davis spent many summers. There are under a hundred recipes which are disarmingly simple yet make few concessions to the novice cook: this is not Delia Smith for the Mediterranean masses. There are eight main chapters covering soups; omelettes; pasta; snails; sea food; meat; salads and vegetables; and sweets. There is an appendix with some further documents about Irving Davis, including a few lines of his own on his life. The love affair of the English (and all northern Europeans) with the Mediterranean had especial piquancy in the nineteenth and early twentieth centuries – before easy travel opened to us other regions of the sun. Irving Davis’ book strikes the same chords of memory and fascination as do the works of Goethe, Winckelmann, Norman Douglas, Gracie Fields, Somerset Maugham, Ernest Hemingway, Scott Fitzgerald, and Elizabeth David. Its publication might be seen as the last gasp of an era. The book has had a pleasing reception in the British and the American press. Although it is the opposite of the current idea of a cookery book (no colour pics, not many recipes, no personality chef), it appeals to the reader as being good to handle, easy to read and attractively decked out. Rowley Leigh in the Sunday Telegraph chose it as one of his Christmas books, and recently wrote about it in the Financial Times (2020).

I give below a recipe from the book, with some of the flavour of the author and his preoccupations.

Onion shoots The word calçots comes from calçar (chausser), to put on one’s shoes, boots, stockings. During the time that the onion shoots are growing one dresses these shoots with earth in order to blanch them (like celery). Cultivation of calçots: Take some small Spanish onions and plant them with their bases just below the level of the soil in January. Allow them to grow to a respectable size which will take in Spain roughly until June. Remove them from the earth and keep them in a dry place until September which is their period of germination. In September plant them in a trench as for celery. Each onion should give seven or eight sprouts. As these sprouts appear earth them up. When they have reached the size of a very large leek (three to four inches across) cut them at the base of the shoot and trim the tops to make them all of equal size. To cook them make a very large woodfire and put a grill on it as large as a spring mattress—I say this because some thirty persons eat thirty or forty onion shoots between them. Turn them over and thoroughly burn them on each side. To eat them, extract the shoots from the burnt exterior with your fingers. They are eaten with the following sauce and these are the ingredients for each person: Two ounces of grilled almonds, two cloves of garlic (the head of garlic grilled on the woodfire), one clove of garlic not grilled, a pinch of red pepper, a little parsley, a little mint, salt, one grilled tomato skinned, vinegar if you like it and oil. Pound all this in a mortar or a large pot beginning with the almonds and finally bind it with oil. The sauce should never be thick. Now dip the onion shoots in this sauce. This is a pre-spring dish eaten only in the neighbourhood of Valls, in the open air under the almond trees in bloom. If it snows so much the better. This is only part of the feast, followed by roast chickens, mutton cutlets, every kind of sausage and of course plenty of wine drunk from the porró.

Review by Ruth Gorb in The Hampstead & Highgate Gazette

On February 28, 1967, a banquet was held at the Dorchester hotel in celebration of the 90th birthday of the legendary chef, André Simon. One of the most important guests was to have been Irving Davis – antiquarian bookseller, gastronome, and a founder member of the Wine and Food Society. When it came to it, he was too ill to leave his home in Hampstead. He sent in his place his step-daughter Ianthe, and her husband John Carswell. “We had to go so that we could tell him all about it – and such things we had to tell! Eight glasses at each place setting, La Rive Amontillado Extra 1819, Chateau Latour 1929… It was an extraordinary occasion.” In her flat in Prince Arthur Road, Hampstead, Ianthe Carswell still has the banquet menu among the memorabilia of her stepfather. There are photographs, letters, antiquarian booksellers’ catalogues – and a wedding invitation: “After 11 delightful years together, Ivy Elstob and Irving Davis have decided to get married.” That was in 1941. Ivy Elstob, Ianthe Carswell’s mother, took pleasure in sending out an invitation that was in keeping with her unconventional life. Lots of lovers and lots of parties, says her daughter, who remembers the riotous lifestyle in Upper Park Road, Hampstead, while her father was away at sea. “Father was a very emotional man: son of a clergyman, a naval officer, a church-goer… He divorced my mother at a time when adultery was the only grounds – and that meant she was not allowed to see us.” Times were hard in 1928, particularly for a divorced woman trying to earn a living. Ivy Elstob lived in a cold, damp basement in South End Road, Hampstead, and almost starved. Then, one day she was near the British Museum and saw an antiquarian bookshop called Davis Orioli. She went in and asked for a job. She got not only the job but Irving Davis as a lover, and they lived happily together for 11 years in what was known then as “sin”. Ianthe Carswell looks back on those half raffish, half innocent days and reflects on the very different attitudes to sex then and now. “Promiscuity was about love affairs in those days. People wrote to each other three times a day, wrote poetry…” Ivy Elstob died during the war, and Irving Davis began to spend more and more time abroad. He had always been a traveller: he loved Italy and set up his first bookshop with Giuseppe Orioli in Florence in 1911, and he moved in literary circles in Paris. A scholarly and cultivated man, whose passion in life was rare books, he also became increasingly interested in food. A keen cook since the 1920s, he discovered the joys of Catalan food when he used to stay with his friends, The sculptor Apel-les Fenosa and his wife Nicole, in their house in Spain. He collected recipes, and in 1969, after his death, they were edited by another great cook, Patience Gray, and privately published. Now, 30 years later, the collection has been published again. A Catalan Cookery Book has Irving Davis’s own subtitle: A Collection of Impossible Recipes. They were, in the ’50s and ’60s, pretty impossible for most British cooks, who would have had trouble finding salt cod and green olive oil in their local shop. Elizabeth David and package holidays changed all that but there are still some of Davis’s recipes – rabbit and snails in chocolate sauce, for instance – that remain impossible, not to say alarming. Ianthe Carswell, who has sampled most of her stepfather’s dishes (although not the snails and chocolate), describes him as a fastidious cook, someone who cooked by taste rather than with exact measurements, who loved simple food that cost practically nothing (such as sopa de farigola, which requires nothing more than water, stale bread, thyme and olive oil), who would spend a whole day making a bowl of perfect stock. Most of his recipes are wonderfully simple and usable, but the book goes beyond the confines of cookery; it is highly personal, and has as a tail-piece a fragment of autobiography of this extraordinary man. Born to upper middle-class Jewish parents, he spent his bar mitzvah present money on Mermaid editions of Elizabethan and Jacobean drama lists, read Classics at Cambridge, and fell in love with Italy. “This is my country. Am I perhaps a descendant of one of the Venetian ghetto…?” His meeting with Orioli (who among his other claims to fame was the first man to publish Lady Chatterley’s Lover) set his feet on the path he followed for the rest of his life. After the book shop in Florence came one in Museum Street, where Davis became one of the best-known antiquarian booksellers in the country. In his later years he ran the business from his house in New End, Hampstead, but it was in his cottage in Oxfordshire that he could indulge his other love, gardening; always ahead of the game, in the 1930s, when English gardeners were showing off giant marrows, he imported courgette seed from Italy and horrified the locals by picking them the size of fingers. Although he got a kick out of smuggling rare erotic books into the country, reading them, he concluded, left him cold – “so much more amusing to read about the pleasures of the table than those of the bed”. Cookery books, he said, should be looked upon as entertainment, as interesting as a detective story and a substitute for television – as his most certainly is.